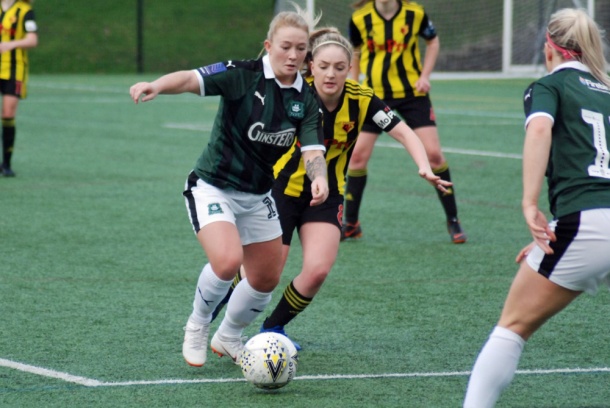 PLYMOUTH Argyle Ladies are hoping to hit the ground running this season in the National League Southern Premier Division which starts in August.

Former Yeovil Town players Helen Bleazard, Natasha Knapman, Jessica Jones and Leah Burridge have all rejected offers to return to the Somerset club, who are expected to be one of their main challengers for the league title.

A delighted joint manager Trevor Rodd said: “These girls are buying into the project we have here. We now have a fantastic partnership with Marjon where we now train and have the use of their superb facilities.

“Not only that but all our three teams will be based at the magnificent facility at the Manadon Hub, which was officially opened by former England and Argyle goalkeeper Peter Shilton this week.”

Argyle unfortunately will be without talented Cornish teenager Tamsin Medd-Gill as she has accepted an opportunity to go to the United States having won a soccer scholarship at Davis and Elkins College in West Virginia to study exercise science.

Medd-Gill said: “I’m looking forward to joining the women’s soccer team at Davis and Elkins College in the USA. This is a great opportunity to develop as a player and as a ‘student athlete’ in the US Soccer system which places a big emphasis on fitness and athleticism as well as skills and team work. I want to thank everyone at Argyle for helping me get this far and developing as a player. I can’t wait to take the next big step forwards.”

Also leaving is goalkeeper Sarah Prior, who has returned to London, Kelly Vinnicombe, who broke into the first team towards the end of the season, is off to University in Cardiff, while another youngster, defender Darcey Hepworth, is off to university to learn to be a paramedic although she will be training with the club until September.

However, Argyle are set to announce three new signings shortly.

Finding a goalkeeper is their priority. Both of Argyle’s teams suffered last season with the loss of goalkeepers but this looks as if it is being addressed with a couple of promising trialists being looked at.

The club held their first training session at Marjons last Monday which was more about assessing their fitness before returning last Wednesday to start training in earnest.

Rodd was impressed with the first week’s turnout at training. He said: “We even had someone travel a hundred miles on Monday for training, now that is commitment. Monday was basically more about the fitness tests while Wednesday was down to actual pre season training with all three teams involved.”

Argyle are due to play their first pre-season match on Wednesday, July 17against a Royal Navy representative squad at a venue and time still to be confirmed.

None of Argyle Ladies players are paid and they rely on sponsorship to be able to play. If anyone is interested in sponsoring a player they should email email s.h.s@hotmail.co.uk.