PLYMOUTH Argyle Ladies picked up three valuable league points with a 3-2 win against high-flying Watford at Marjon University on Sunday.

The result in front of a good sized crowd would have been more clear-cut but for two uncharacteristic errors which led to both Watford goals in the National League Southern Premier Division match.

However, it was one of the Pilgrims’ best and most professional performances of the season, despite having a depleted squad.

Argyle went in to the game without leading scorer Helen Bleazard, central defender Panagiota Papaioannou and midfielder Zoe Cunningham. Bleazard was away, Papaioannou suffered concussion at a Greek under-20 training camp and was advised not to play, while Cunningham was declared unfit.

Their absence meant a call into the first team squad for teenagers Faye Ivall and Tamsin Medd-Gill.  It also left managers Trevor Rodd and Dave Leonard with a dilemma as to who would take on the main striker’s role, which in the end went to Jessica Jones.

The opening exchanges were even, but Argyle were caught out in the 13th minute when Ebony Dover’s poor back pass to Lindsay Rogers led to the Pilgrims’ goalkeeper unwittingly slamming the ball into Adekite Fatuga-Dada and it then ricochet up into the air for Fatuga-Dada to score.

That set-back seemed to inspire Argyle. Four minutes later they had a great chance Becky Dandridge raced on to a through ball only to smack her shot against the crossbar before Kayley Lane then had a goal ruled out for offside.

Rogers was called into action to save down low but Argyle’s pressure saw them deservedly draw level on the half-hour mark when Dandridge raced into the penalty area only for her to be floored and a penalty awarded. Captain Kate Middleton stepped up to take it and slammed the ball into the net.

Both sides had chances after that, but Argyle were beginning to take control and it was no surprise when they took a 2-1 lead two minutes before half-time when Mollie Taylor sent in a cross from the right which flew into the far corner of the net.

The Pilgrims started the second half as they ended the first – on the attack. Leah Burridge shot narrowly wide, while Amber Pollock was denied by the goalkeeper.

Argyle kept pushing and just before the hour mark the hard-working Dandridge fed Jones, who fired the ball into the top corner of the net for a 3-1 lead.

Argyle remained in charge until two minutes before time when Middleton was caught in possession which left Leanne Bell to race clear to score.

Joint manager Rodd said: “After getting nothing out of the last three games the girls showed great composure against a very good Watford outfit.

“We gave the girls a few choice words at half-time, reminding them of their responsibilities. This seemed to motivate them and they produced a terrific win.”

On the injury front, Ebony Dover suffered a knock on her thigh and will have a scan this week, while Steph Beck jarred a knee. Papaioannou and Cunningham will also be assessed during the week.

In the South West League Western Division, Argyle’s development team suffered only their second defeat of the season when they lost 3-0 away at Bideford, who had Beth Ellis scoring a hat-trick.

In the opening exchanges Argyle looked up for the challenge as they were a constant threat to the Bideford defence.

On nine minutes the visitors almost made a breakthrough when a cross from Kelly Vinnicombe found Nicola Champion inside the six yard box and her effort thundered off the Bideford crossbar. The ball dropped to Shania Fenlon, but her effort was cleared off the goal line.

It seemed only a matter of time before the young Pilgrims would make the breakthrough, but instead it was the home side that struck first when three minutes before half-time Ellis latched on to a through ball to give Bideford the lead.

The goal seemed to knock the confidence out Argyle and they struggled to get any momentum going and their normal fluent passing game was breaking down with several unforced errors.

Bideford added a second when another stray pass out of the defence was intercepted and the ball was played through to Ellis, who made no mistake.

Despite going 2-0 down, there was no real response from Argyle. They created the odd moment in the opposition penalty area but they rarely threatened Zoe Stock in the Bideford goal.

And with 15 minutes remaining Ellis slotted home a penalty to seal the win.

Manager Rob Bonney said: “All of the coaching staff agreed that we were just not good enough on the day and we need to accept that.

“We did not have to say too much to the girls after the game as they knew they did not perform to standards they have set themselves recently.

“We know what type of game Bideford play and we just didn’t get to grips with it. We didn’t deserve anything from the game; it is as simple as that. We’ll get back to working hard at training and move on quickly.” 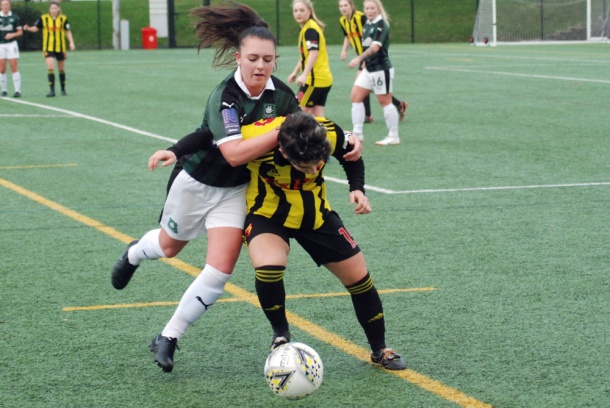