Adams met all the players and management staff and watched some of their training.

Argyle Ladies’ joint manager Trevor Rodd said: “The girls were really pleased at seeing Derek showing such interest and I think he was impressed with what he saw.”

The Pilgrims are due to play at Bideford in the defence of the Devon Women’s Senior Cup on Sunday.

A number of players had minor knocks so following the clubs policy of giving youngsters a run out in the first team, the management team have called up Cornish 16-year-old Sally Salter (pictured).

If Argyle win then they will meet Marine Academy Plymouth in the second round with the tie due to be played on Sunday, November 18.

The Devon Senior Cup is treasured by Argyle, who have won it on 12 occasions.

The first team were left without a match last weekend after their National League Cup tie at Southampton was called off due to a waterlogged pitch. The tie has been re-arranged for next Sunday and will replace Argyle’s home league match against Cardiff City.

It means the Pilgrims will not be at home until Sunday, November 4 when they play Loughborough Foxes.

Meanwhile, Argyle Ladies’ new signing Panagiota Papaioannou has been called up to the Greece Under-19 squad for two friendly matches against Slovakia next month. 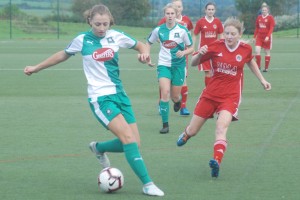 Papaioannou (pictured) has played seven times for them previously at that level, scoring one goal.