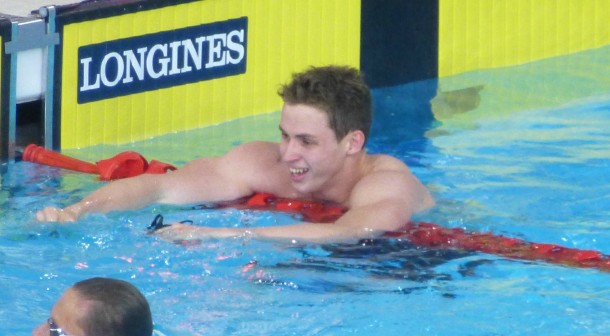 BEN PROUD produced a sensational swim in the semi-finals of the men’s 50m freestyle on Wednesday night at the European Championships in Glasgow.

Proud stormed to victory in his heat in a new championship, British and Commonwealth record time of 21.11 seconds.

That was not only the fastest time in the world this year, but also the quickest ever achieved in a textile suit.

What was more impressive is that Proud glided into to finish. Up until the 45-metre mark he was on course for Cesar Cielo Filho’s nine-year-old world record of 20.91.

“I am happy with that as it’s a personal best,” said Proud afterwards.

“It felt good. It was a semi-final swim so it was very relaxed. Yeah, 21.11 is a great time, but there’s one of two things I want to fix. However, the final is all about medals. I will come back tomorrow night and just see what’s there.”

Fannon had booked his place in the semis with a 22.26 second heat swim in the morning. He improved on that in the evening, clocking 22.14 second, but it was not enough to reach a strong final, with six swimmers going under 22 seconds.

Plymouth’s Matthew Dixon and David King will also be in European Championship action on Thursday.