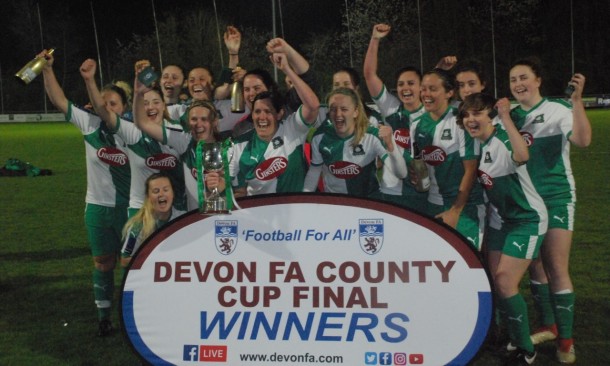 Both teams were knocked out in the League Cup competition at the start of the season – Buckland going down 2-1 at Keynsham Town while Argyle slipped to a 4-3 defeat at the hands of Exeter City.

Argyle put that Devon derby defeat behind them and are currently on a five-match winning run in the National League Southern Premier Division, while Buckland have suffered four straight defeats in their Division One South West campaign.

The Pilgrims have played Buckland three seasons in a row in cup competitions. In 2016-17 they lost 4-2 when Buckland went on to win the Devon Senior Cup. The following season, Argyle were taken to extra-time before winning 4-3 on their way to winning the Devon Cup. They repeated that feat last season by beating Buckland 3-2 in the final to retain county cup.

Pilgrims manager Dave Leonard is not taking anything for granted and will go into the tie with the same squad that returned from Milton Keynes last week with a 5-1, plus the addition of Steph Beck and Ebony Dover, who turned out for the development team Sunday.

Leonard said: “Football is all about momentum and we really want to keep the momentum going.

“The last five games have been free scoring. I have a full squad to choose from so I will be making changes to the personnel but we have got a squad that isn’t going to take Buckland lightly – we never take the opposition lightly and we will give the respect they are due.”

“The girls know there is competition at the club for places and that’s put the pressure on everyone at training and it is why we are on such a good run.

“We are not taking Buckland lightly and we are not going to ditch this cup. It is a serious cup that we can win and Argyle want to win national cups outside of the county.

“We know they (Buckland) have a new manager but I will not be expecting a performance like we did against Exeter. We talked about it at training, the girls look fit and strong and whatever team I pick it will be a strong one.”

The young Pilgrims got off the mark at the first attempt last week by beating Alphington 6-1.

Bude have only played twice to date, beating Exeter & Tedburn Rangers 2-1 and losing 9-1 to Plympton, who are the current league leaders.

The development team will go into Sunday’s game full of confidence after last week’s terrific second half performance. They will have to do without captain Rachel Javan, who will miss the game due to the head injury suffered against Alphington. Also missing will be the impressive Dani Wyatt, who suffered a stress fracture to her foot and Sally Salter who is unavailable.

They will welcome Ellie Bishop, who comes into the squad for the first time this season. The injuries will also give a couple of the youngsters a chance to step up and impress.

Manager Rob Bonney has emphasised to the team that although they impressed last week, they must not get complacent and they need to build on the performance and result.

The future looks bright for Plymouth Argyle Ladies after their new-look under-18 team beat Torquay United under-18s 12-0 in midweek in front of around 200 supporters at Bolitho Park.

Argyle are having to play friendly games as the proposed Devon Under-18 League fell through. Their only previous match was a 5-4 win at Swindon Town.

The Pilgrims had to wait until the 20th minute to take the lead when Kate Grigg opened the scoring.

After that Argyle started to gain control but had to wait until the 43rd minute to double their advantage when the lively Beth Everson finished off a terrific run to slot the ball into the net. Within a minute Grigg had knocked in her second.

The second half started in a rush when two minutes in the impressive Grigg completed her hat-trick.

Two minutes later Leah Johnson made it 5-0 with another great strike.

Argyle had to wait until the 59th to add the next through Everson. Ten minutes later the impressive Everson completed her hat-trick.

The goals kept coming and in the 71st minute Grigg knocked in her fourth and Maddie Leppard then scored the next two.

Despite Torquay’s best efforts Grigg netted her fifth and Everson her fourth to seal the win.

Manager Gary Bottomley said: “The girls took 10 minutes to relax and to be honest they played really well. They got the ball down and played some decent football and they kept their shape well.

“To be fair, Torquay never gave up and kept going to the end.”