CITY of Plymouth Trampoline Club returned home with two medals and a number of top 10 performances at the British Championships in Birmingham.

The event is the highlight of the domestic trampolining season and attracts all the country’s top gymnasts.

Jenny Moore, competing in the ever-growing women’s category one disability event, backed up her medal at the recent English Championships by picking up a bronze at the Birmingham Arena.

She showed quality and determination to book her place in the final, where she improved on her preliminary score to claim a British medal.

There was also another medal for Nyla Evely and her Leeds partner Gabby Moorhouse in the 11-12 year-old synchro competition. They had impressed at the English Championships and followed that up with a bronze in Birmingham.

In the individual event, Evely produced two routines with enough quality to gain herself a place in the top eight final the following day. She produced her best final routine to date, gaining a personal best of 46.330 points, which was the second highest of the day in that age group and an improvement of nearly three points on her preliminary routine. It helped her climb the rankings to secure an impressive fifth place. 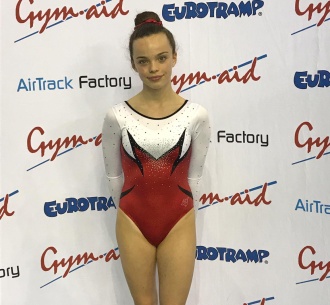 There was a top 10 place for Evangeline Piper in the 13-14 years’ double mini-trampoline (DMT). She compete her first pass with complete control and a near perfect landing. With the age group fierce in quality from the other gymnasts, Piper stepped up to compete her highest difficulty pass to date, competing two double somersaults across the apparatus. This pass was one of the highest difficulty passes from all the 13-14 females at this event, but unfortunately a small mistake left her in a penalty zone, but she still secured ninth place.

Piper’s next competition will be the Loule Cup in Portugal between October 10-13 where she will be competing for England with City of Plymouth team-mate Steph Hancock.

There was also a top 10 finish in Birmingham for Libby Weddle in the women’s 15-16 year-old DMT event. She produced her best performance of her young career, having increased the difficulty of her moves since qualifying for the championships. She completed her new upgraded passes with determination and control to make the final. In the final, she made a mistake on her penultimate pass but did not let that affect her, completing her final pass with the high standard she had set herself the day before in the preliminary round to secure eighth spot.

An injury-hit season had left Pearson battling to qualify for the championships but he did so and his efforts in juggling training around studying at Exeter University were rewarded with a top 10 finish.

He completed his first routine at the championships with complete composure, scoring his highest routine score to date by two whole points.  In a highly competitive category Pearson had to give his second routine everything he had, but unfortunately a small mistake on move six left him fighting to finish the routine, but he did to claim an impressive ninth-placed finish.

City Of Plymouth have gymnasts at three international events coming up before the end of the year.