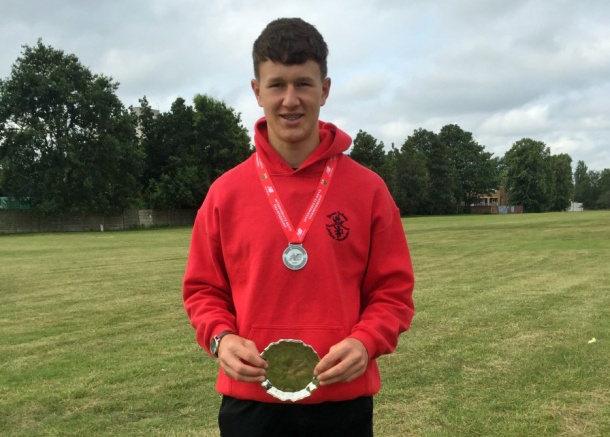 TAVISTOCK AC’s Edward Fileman smashed his personal best to win a bronze medal on his England debut at the SIAB International in Swansea on Saturday.

Fileman had won a silver medal at the previous week’s English Schools’ Championships in Birmingham and it looked like he was going to pick up the same colour in Wales.

The Ivybridge Community College pupil was sitting in second spot, just seven centimetres behind Wales’ Harry Davies, until the final round after throwing a massive 51.70m effort in the third round. That was the first time he had thrown more than 50m in a competitive outing. His previous best was 49.86m.

But his England team-mate James Wordsworth pulled out a personal best effort of 52.27m with his final throw to win gold and push Fileman down to bronze.

The top three threw more than seven metres further than anyone else. They are the only three under-17 athletes in the country to have thrown over the magical 50m-mark this season.

Meanwhile, City of Plymouth’s James Arnott (T46) ran a season’s best time of 11.27 seconds to finish fifth in a high-profile multi-class 100m event at the Anniversary Games in London.

That was just 0.03 of a second off Arnott’s lifetime best and came running into a strong head wind.

Arnott’s City of Plymouth team-mate David King did not get the clean run he wanted to lower his season’s best in the men’s 110m hurdles in London.

In a scrappy race, that featured many of the top sprint hurdlers in the world, King clocked 13.66 seconds to finish eighth.

It was a slow race for everyone, with King’s GB team-mate Andrew Pozzi coming sixth in 13.52 seconds and Commonwealth Games champion Ronald Levy seventh in 13.60 seconds. European champion Pascal Martinot-Lagarde only clocked 13.49 seconds.