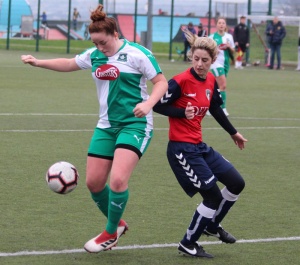 A REVAMPED Plymouth Argyle Ladies development side got their pre-season underway with a narrow 3-2 away defeat to Somerset side Middlezoy Rovers.

With the disappointment of winning their league last term but not been able to earn promotion due to FA rules, the club have lost of a number of players.

They have said farewell to team captain Alex Hugh, 20-goal striker Gabi Alphous, centre-half Becky Parkyn and striker Shania Fenlon, while they will also be missing Tamsin Medd-Gill and Kelly Vinnicombe, who are going to be studying in America and Cardiff respectively.

Playing against a team from a higher division, Argyle understandably took time to settle and had to be grateful to goalkeeper Walsh for three smart saves to keep them in the game.

But the Pilgrims slowly grew in confidence and started to put some passages of play together. It was one of these that led to the opening goal. Some fine interplay between Kia Robins, Williams, Bishop and Wyatt released Nicola Champion, who shot past ex-Argyle keeper Lindsay Rogers.

On the stroke of half-time, debutant Keat almost increased the lead when her fierce volley was well saved by Rogers.

The second half was a complete turnaround and Middlezoy piled on the pressure and one of their early efforts cannoned back off the post before a needless free-kick given away resulted in the equaliser. The well struck free-kick cannoned back off the crossbar and Argyle did not react to the rebound as Chloe Snook pounced to score.

It was another mistake that lead to Middlezoy taking the lead when the ball was given away in midfield and a quick through ball led to Walsh being beaten on a one on one situation by Ellie Orritt.

Argyle eventually got their game together and came close on a couple of occasions. The equalising goal finally came in the shape of teenager Everson, who outpaced two defenders before her shot took a deflection that looped over Rogers into the goal.

The game had a final twist though when Bishop appeared to have been fouled in midfield. With the Argyle players expecting the referee to stop the game, Middlezoy raced away to score what was to be the winning goal. Argyle threw everything at Middlezoy but could not find the equaliser.

Manager Bonney was happy with the team’s performance. He said: “Technically we were the far better side, but we just showed naivety in certain aspects of our game. There is a lot of work to do but it was a promising start.”