PLYMOUTH Argyle Ladies are offering an opportunity to potential new players by holding an opening training session this month.

The club have just enjoyed an impressive season with their first team recording their highest finish in the National League Southern Division and winning the Devon FA Senior Women’s Cup, while their development team were crowned South West Western Division champions.

They are keen to build on their success and to keep developing women’s football in the city.

Anyone is welcome to attend the open training session which will be held on Sunday, June 23 at the Manadon Sports Hub between 2-4pm.

The club are looking for potential first team, development team and under-18 players. Anyone interested should register their interest by emailing secretary Andrew Bellamy at andrewbellamy68@me.com stating their name, date of birth, playing position and any previous clubs.

Argyle are still waiting to see who they will be playing against this season. That should be finalised at the league AGM next week.

The Pilgrims know they will be playing Yeovil Town but it seems Loughborough Foxes have requested a transfer to the National League Northern Division. There could also be a change of name for Queens Park Rangers. 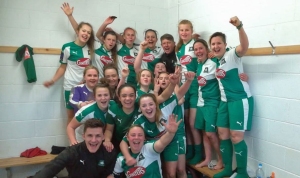 Argyle’s development team will know the make up of their opponents in the South West League at the AGM which is being held on Wednesday, June 26.

The Pilgrims are forming an under-18 team who have shown an interest in joining the Devon girls’ league.

Meanwhile, Argyle have lined up some juicy pre-season games for both the first team and the development side, including a home fixture against Super League outfit Bristol City.

Argyle suffered last season with their pre-season preparations, but this year joint managers Dave Leonard and Trevor Rodd have had time to arrange some excellent fixtures.

Argyle return to pre-season training on Monday, July 1, with their first warm-up game against a Royal Navy representative side on Wednesday, July 17.

This will be followed eight days later with a trip to Exeter City for a Devon derby. Next up is a visit to Bishops Lydeard on Sunday, July 28.

Argyle will then welcome Super League outfit Bristol City two days later. Bristol have a number of players competing in France at the World Cup.

The Pilgrims end their pre-season campaign on Sunday, August 11 when they travel to Poole Town, who they beat 6-1 when gaining promotion two seasons ago.

Argyle’s development team also face a busy pre-season. Their first match is on Sunday, July 21 when they travel to Middlezoy Rovers. The following Sunday they travel to Cheltenham Town.

On August 4 they are off to AFC Bournemouth before ending their pre-season in Cornwall when they visit Charlestown on August 11 before playing Callington Town the following Sunday.