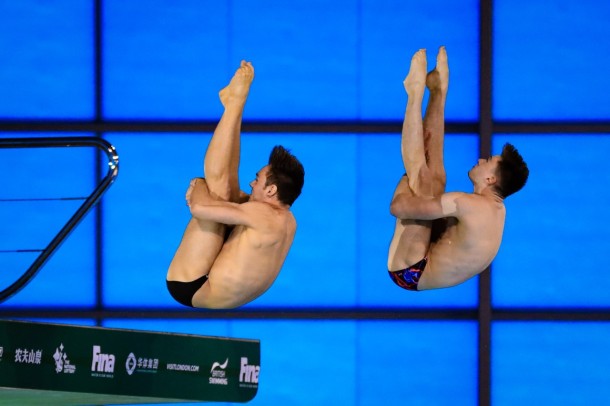 TOM DALEY won his first international synchro gold medal with Matty Lee on Friday to get Great Britain off to a perfect start in the London leg of the FINA/CNSG Diving World Series.

Daley and Lee sent the packed home crowd into raptures with their performance, which saw them set a new British record score of 477.90 points.

They beat China’s Hao Yang and Junjie Lian to victory in only their sixth event as a pair. The British duo had previously won a silver and a bronze medal at earlier rounds of the World Series, but had not been able to challenge their Chinese rivals.

A delighted Daley said afterwards: “We knew that we were capable of doing that as we’ve been doing it in training, but this is the first time everything has come together in one diving list. There’s still more to get out of the list, but we’re pretty happy with that.

“The home crowd support was just fantastic and being able to compete in front of family and friends and beat the Chinese gives you a lot of confidence, especially heading into the World Championships.”

Lee added: “I’ve never interacted with the crowd like that before, turning around with that much confidence and thinking, we’ve smashed it and punching my fist in the air. I’m speechless.

“In the junior world I established myself as quite a successful athlete but this is my first senior international gold medal – I’m over the moon. We’ve still got a few more competitions to go here, but it’s a great start.”

The duo made a strong start to the competition – their first two required dives receiving good scores from the judges, before an excellent round three inward three-and-a-half somersault tuck (407C) garnered 82.56 points, to elevate them to second place at the halfway mark.

With a large, vocal home crowd roaring them on, their momentum continued to build as they aced a back three-and-a-half somersault pike (207B) for 91.80 points, replicating that score in round five to overhaul the Chinese.

Heading into the final round the GB duo led and knew a flawless final dive would win gold, which they duly delivered. With an expectant home crowd willing them on, they produced one of the highest scores ever recorded in men’s synchro diving, a forward four-and-a-half tuck (109C) earning a huge 104.34 points to put the result beyond doubt.

Their final total of 477.90 points was a new British record and pushed China and Russia into the silver and bronze medal positions with scores of 459.00 and 448.50 points, respectively.

The previous British best on the international stage was Daley and Dan Goodfellow, who scored 444.45 points en-route to bronze in Rio three years ago.

Daley will be back in action on Sunday in the 10m individual competition and the mixed three-metre synchro with Grace Reid.