THREE Plymouth members of ISCA Men at Arms will be gaining competitive action in the fast-growing sport of medieval combat fighting on Saturday in Bristol.

Joel Collet, David Sibly and John Sproson will join up with Bristol’s Dave Sheppard to take on teams from Wolverhampton, Sheffield, London and Birmingham at Barton Hill Rugby Club as part of the Bristol Banshees fundraising day.

This tournament is aimed at beginnings and fights will be three against three, but at the highest level they move up to five versus five and in some prestigious tournaments it can be anything up to 30v30.

The International Medieval Combat Federation (IMCF) was founded in 2013 and the World Championships will be coming up in Serbia.

Many of the participants have come from martial arts backgrounds and ISCA’s Plymouth base is Hybrid MMA Gym in Coxside.

ISCA are the South West’s only full contact medieval combat team and they fight all over the country. They are currently ranked second in the national eliminations and one of their squad will be competing for their country at the World Championships.

Competitors arm themselves with full steel weapons (blunted and rounded for safety) and armour. The object of the fights is to knock over all the opposing team, whether with wrestling, knockouts or with their weapons. 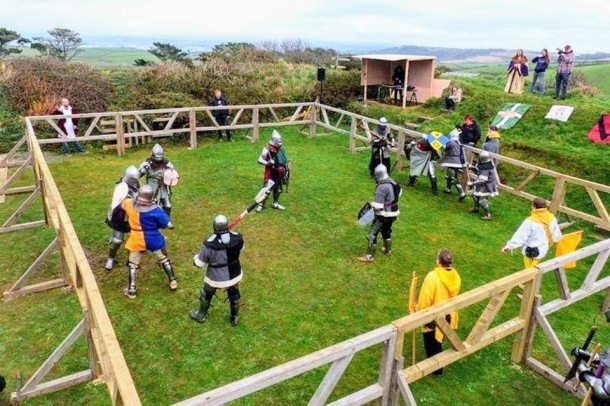