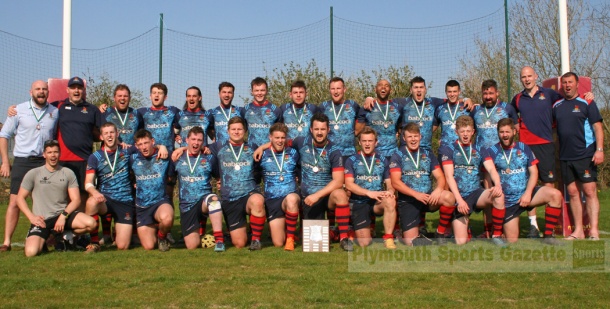 DEVONPORT Services could not have come closer to causing a major upset and winning the Devon Senior Shield final on Sunday.

Services narrowly lost 24-20 away at South West One title winners Okehampton, who had beaten them 41-7 eight days earlier at the Rectory and 49-5 at Showfield on the opening day of the season.

Okehampton’s supporters appeared to be expecting another comfortable win, but at the end they were willing the referee to blow his whistle as Services, who had led for much of the game, camped on the hosts’ try line looking for a winning score.

At one point it looked like Services had got the ball down on the whitewash. A number of their players celebrated but they were deemed to have been stopped an inch short and when they flung it wide trying to go over in the corner Okehampton just managed to get across and push them into touch right at the corner flag to end the game.

Devonport were gutted to lose a final by such a small margin, but head coach Mike Lewis said he could not be prouder of his team for the way they fought for victory, especially as they were missing a host of players.

“I thought what changed from last week to this week was our desire and hunger,” said Lewis.  “There was something to play for this week – there was a tangible goal at the end.

“You could see the fire in the players’ bellies this week – they had real heart and determination – and it was fantastic to see and it got us through the game.

“It wasn’t the prettiest of games from our point of view, but I thought we did fantastically well to push them all the way.

“Our boys really dug in and they worked so hard against quite a clinical side who are used to breaking lines, but our defence was so much better this week. Our attack maybe wasn’t quite there as we put so much into effort in this heat into our defence.”

On the decision to go wide when they were camped on Okehampton’s line in the dying seconds, Lewis said: “It was on out there as they only had two defenders, but by the time the ball came out of the back of the ruck they (Okehampton) just managed to get that extra person around and we just couldn’t quite get over the line. But that’s cup rugby for you. It was a great final.”

It looked like it might be a long afternoon for a much-changed Services side when Okehampton scored in the left corner through Kieran Lee in just the seventh minute.

But Services were in no mood to suffer another big defeat. They scrummed really well early on and went in front on 15 minutes when Andy Pond scored from close range after good pressure on Okehampton’s line. Richard West converted well from the left to put his side 7-5 ahead.

That become 14-5 on 24 minutes when West scored after young scrum-half Dylan Daley had been stopped just short of the try line after a good break started by captain Matt Gregory, who had a massive game for Services. West also added the conversion.

Okehampton then had a series of penalties and scrums in Services’ 22 and eventually prop Pat Nash scored and Richard Friend converted to close the gap to two points.

However, in first half injury-time, West kicked a penalty to give Devonport a 17-12 lead at half-time.

Okehampton wasted a glorious chance at the start of the second period when they knocked on with the try line at their mercy but they did pull level on 54 minutes when scrum-half Joey Bruce scored in the right corner.

With the game on a knife-edge, Services were awarded a penalty at a scrum in Okehampton’s half and tempers flared. When the dust settled referee Adam Nicholas sent off former Albion and Cornwall prop Rob Dugard and sin-binned Services’ Joe Semple.

Devonport still had the penalty and West went for goal and put it between the posts to put his side 20-17 in front.

However, playing 14-a-side for 10 minutes appeared to benefit Okehampton, who scored six minutes later through a bit of good fortune. A chip kick to the right corner looked like it was going into touch, but it bounced favourably for Okehampton and Kieran Lee did brilliantly to keep it in and produced a piece of magic to somehow get the ball to Rhys Palmer for him to score. Friend converted to put Okehampton four points in front.

But when Services did get back up to 15 players in injury-time they camped on Okes’ line looking for that match-winning score. However, they just could not get over the whitewash.