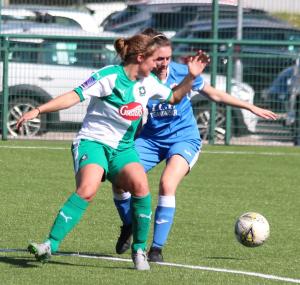 Argyle found themselves 3-0 down just after half-time with individual errors costing them goals, but on a baking hot day they did make a game of it and gave their high-flying hosts a bit of a scare.

The Pilgrims, who had been looking to avenge a 3-2 loss at home by Cardiff early last month, handed Cornish teenager Tamsin Medd-Gill her first league start of the season, but they were  without Greece under-20 international Panagiota Papaioannou, Zoe Cunningham, who is serving a two-match suspension, long-term injury victim Becky Dandridge and the unavailable Steph Beck.

Argyle started brightly, but were unfortunate to concede when they gave the ball away in their defensive third and Cerys Jones scored with a terrific strike into the far corner of the net.

The visitors continued to contain the Cardiff team packed with Welsh internationals until another defensive lapse saw the Argyle defence fail to deal with a long ball leaving Kylie Nolan to fire in past goalkeeper Sarah Prior to make it 2-0.

It got even worse when early in the second half they did not deal with a right wing cross which left Cori Williams bundling the ball in to the net for the Welsh team’s third goal.

Argyle certainly do not lack ability, courage and dedication as at times they played Cardiff off the park and they rolled up their sleeves and forced their way back into the game.

The revival started in the 65th minute when Leah Burridge picked up the ball 30 yards out, drove forward and let fly to find the bottom corner of the net.

Argyle were now all over Cardiff and a second goal deservedly came when eight minutes from time the hosts failed to clear their lines and Natasha Knapman scored with an overhead kick – her sixth goal from the last four matches.

It was now game on and the Pilgrims went looking for an equaliser, but their efforts came to nothing, despite creating a few more chances.

Argyle joint manager Dave Leonard said: “I can’t fault their commitment and desire but three errors cost us the match.

“When you are losing 3-0 and chasing the game in baking heat it isn’t easy, but the girls showed their class and I cannot fault their courage and commitment. At times they played Cardiff off the park but three defensive errors cost us three points.”