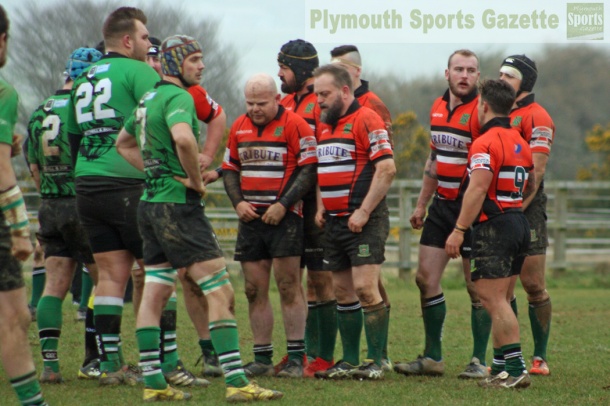 PLYMOUTH Argaum’s Nick Hancock has made a habit of surprising people in his relatively short rugby career.

Having never played the game until taking it up as a 43-year-old self-confessed ‘couch potato’, he ended up becoming Argaum’s captain, then a key member of their team that won back-to-back promotions between 2013 and 2015 and in 2016 was named amateur player of the year at the National Rugby Awards at Twickenham.

But his playing days looked to have ended last season when, at the age of 50, he suffered a heart attack during a game and needed a triple bypass operation. He suffered a collapsed lung in surgery and had to spend a while in ICU and months recovering.

Yet amazingly last Saturday, Hancock had his boots and an Argaum first-team shirt back on again as he took to the field towards the end of the first half against Hayle to try and help the club, where he is chairman, stay in the Cornwall/Devon League.

Hancock could not get the dream result he wanted – Argaum narrowly lost 18-15 – but he had achieved a goal that had been driving him on through some worrying weeks in hospital and months recovering.

“From word go when I had the heart attack and had the triple bypass one of my ambitions was to come back to training,” said Hancock. “I thought I might be able to play, but didn’t know if I would be able to play competitively. However, I had it in my head that I wanted to do it.

“It has been an emotional journey as I didn’t heal right. When I came out of surgery I had a collapsed lung and spent four days in ICU instead of just the one and then I had these on-going issues.

“I got admitted to hospital twice post-surgery, but the good thing was they checked me out really good. I had CT scans on all the grafts, had lung function tests but the problem turned out to be just one tiny pill I was taking. It was a beta blocker but they have changed that I have been good since.

“I started training again in early January. I finished my cardiac rehab and had a chat with the coaching team. They, and all the lads, were hesitant and more nervous than me, but I know what my body is like.

“I thought I might get 10 minutes on Saturday – I certainly didn’t think I would get 10 minutes in the first half and all the second. I am a bit rusty, but I am back.

“I came on as a substitute and my goal now is to become a starting prop. This season we have five games left and I aim to play in all five.”

Hancock will be 52 this year, but that does not worry him – after all he didn’t start playing until he was 43!

“Age is just a number to me,” he said. “If I hadn’t had what I had last year I would have still be playing anyway this season.”

Although Hancock’s story does have a happy ended, it could easily have been different as he did not even realise he had suffered a heart attack. He continued playing in the game and went and helped out behind the club bar afterwards. It was only later in the week when he was still not feeling right that he went to get checked out.

“I suffered it (the heart attack) playing on February 16 against OPMs,” said Hancock. “I must have suffered it early doors in the game, but I was playing hooker instead of prop for only the third time in my rugby career and it was just a pain in the centre of my back – it was very specific. I just thought it was just from playing in the hooker position.

“I went all week with it. It was only the fact that I was going on a stag-do that I decided to go and get checked up. I just thought it was muscular but within a couple of hours they had diagnosed I’d had a heart attack.

“They did some blood tests and there’s an enzyme that is normally around 10 in everyone’s body but mine was 3,500. They then did an angiogram the next day and two of my arteries were completely blocked and the good one had been blocked but had grown itself around the fully blocked one. They confined me to bed. I had 36 days in hospital until I had surgery.

“So it has been an emotional journey.”

It was something that had been on the club’s agenda for a while but the incident brought home how crucial the piece of medical equipment could be.