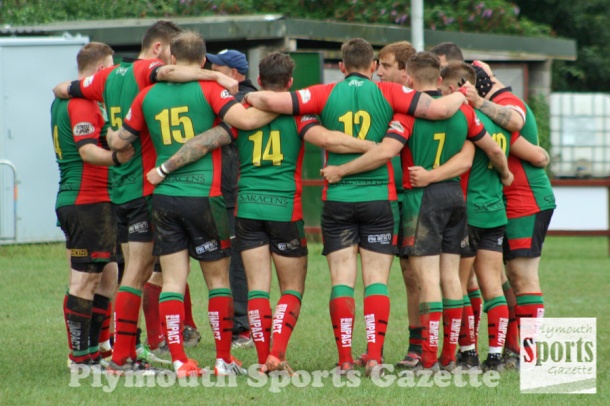 TAMAR Saracens remain unbeaten in 2019 after earning a 19-19 draw away at title-chasing Exeter Athletic on Saturday.

Sarries out-scored second-placed Exeter by three tries to one, but the boot of Athletic’s Andrew Alderman made sure the hosts secured a share of the points.

In the first half Alderman converted Jake Roberts’ try and kicked two penalties as they led 13-12. Tamar Saracens’ first half points came from two tries by Rob Hall, one of which was converted by Swatton.

Alderman then kicked two more penalties after the break before Scott Sheldon scored a try that Swatton converted to level the match.

“It was a tight game,” said Saracens coach Pete Lethbridge. “I know they had a lot of players out but we had players out as well.

“Our set-piece went really well but it was just our indiscipline. They had four penalties which they kicked. It wasn’t bad indiscipline – it was just silly mistakes like holding on to the ball too long or not rolling away and that just let us down.

“But we scored more tries – three to one – and should have won, which makes it a bit disappointing.

“However, the whole team played really, really well, it was just those penalties that we gave away that cost us.

“It was a really good game. Although we should have won, we are happy we got two points and we are still unbeaten this side of the year.

“Hopefully, now we can move on a bit. We have Totnes next week and we’ll be trying to get a result up there.”

Old Techs nearly pulled off a good win at third-placed Exeter Saracens. They were 21-7 up at half-time and 31-21 ahead mid-way through the second half, but just ran out of steam and ended up losing 40-31 after the hosts scored a converted try with the last play of the game.

Techs did score five tries for the second week running to return home with at least a point, but they felt it could have easily have been a win had they just had a few more bodies on the day.

“We only went up with 17 players and the two replacements were me and Jimmy Carter, who is 49,” said coach Shaun Bedford-Smith. “And Jim had to go on after 30 minutes.

“We basically just ran out of steam as we had nobody to bring on. Players were out on their feet. We had two yellow cards so we had to play 20 minutes with 14 men. The players were just knackered – they could not have given anymore.”

Bedford-Smith added: “We had hoped to get two bonus points as there was only two points in it but they scored with the last play of the game.

“If we’d had replacements to go on I think we would have got a result, to be honest.

“It was a rearranged game and we had people away, but we couldn’t have asked for more from those that did play.

“We played some really good stuff and it was a good game of rugby to watch.”

Matt Simmonds scored twice for Techs, with their other tries coming from Billy Evans, Jack Williams and Ben Lynch.

OPMs did not have a Devon One match on Saturday. Instead they played the Pennisula Medical School in the quarter-final of the Lockie Cup at King George V Playing Fields.

The Medics had a strong side out and won 31-6 to set up a semi-final meeting with Old Techs on March 30. Techs progressed to the last four after holders Plymstock Albion Oaks were disqualified for playing an illegible player against them in their last eight meeting.

OPMs, who are still without a win in 2019, were unable to manage a try on Saturday against the Medics, with their only points coming from two Sammie Matts penalties.

In the Devon Merit Table, DHSOB pulled off a good 36-35 win over fourth-placed St Columba & Torpoint at Stonehouse Creek.

It was only their second win of the season and was the perfect way to bounce back from their disappointing loss to Plym Vic in their last outing.