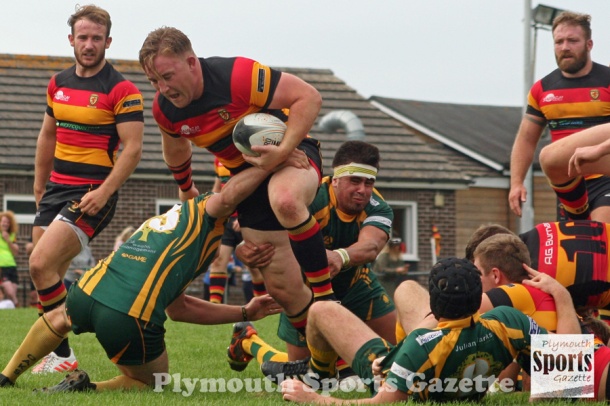 SALTASH began their preparations for life in Western Counties West with a warm-up match against Plymstock Albion Oaks at Moorlands Lane on Saturday.

The fixture was played over three 30-minute periods so that both clubs could have a look at plenty of players and combinations. The sides, who were in the same division last season, also agreed not to take any conversions.

Over the three periods, the Ashes out-scored Oaks eight tries to four.

It might have been Saltash’s first run out of pre-season compared to Oaks’ third, but the host club did the damage in the opening period, scoring four tries to Plymstock’s one. 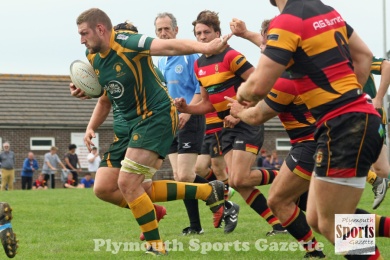 They won the second period two tries to one, while the final third ended two tries apiece.

Scrum-half Olly Mulberry was a thorn in Oaks’ side all afternoon running in four tries, while Plymstock also struggled to handle the power and pace of new Ashes captain Lewis Wells.

Oaks, though, had their moments and some of their young backs showed up well.

Plymstock have certainly tested themselves in pre-season by playing Saltash, Devonport Services and Ivybridge.

“It has been a tough pre-season,” said player-coach Aiden Taylor. “We have come up against three sides in a higher league than us.”

Taylor, though, hopes that will benefit them come the start of the league season.

“I think it will,” he said. “Saltash were the most physical team we have played against all pre-season. We just came up against a better pack on the day, but when we play league games I feel that will help us out massively as there are some big boys in our league like Lanner and Bude.” 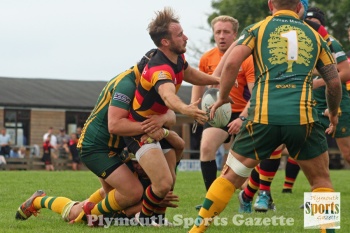 He added: “We have Tamar Saracens on Thursday and that is when we need to put our structure and plays together.”

Oaks have confirmed that Corey Jamieson has joined Taylor and Tom Richards on their coaching team following Callum Cload’s move to Holland.

“Corey Jamieson has become backs coach,” said Taylor. “Corey played last year but he is going to step up and really work the backs now Cal has gone.”

Oaks had hoped to have Billy Evans for their Cornwall/Devon League campaign, but after playing in their opening two pre-season games it appears the talented utility player has decided to stay with Old Techs.

Meanwhile, Saltash coach Nick Skinnard was happy with his side’s first run-out of pre-season and is now looking forward to hosting newly-promoted South West One side Devonport Services this coming Friday (7pm).

“It will be nice to play them (Services),” said Skinnard. “We have played them every year for the last three of four seasons and we have done pretty well.”