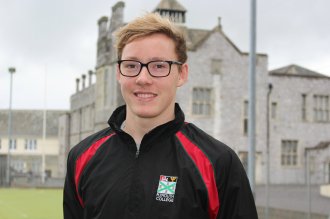 PLYMOUTH’S Myles Pillage came agonisingly close to winning a medal with Jess Varley in the mixed relay event at the World Cup in Los Angeles overnight.

They started in the pool where Pillage and Fotheringhay’s Varley got their competition off to a fantastic start with a rapid time of 1:59.60 – one of just two teams to dip under the two-minute barrier.

Fencing is currently the weakest discipline of both youngsters but they battled valiantly throughout the ranking round, eventually finishing with 17 victories and 25 defeats to their name.

A further victory followed over Hungary in the bonus round meaning the British duo sat in fifth place after the opening two disciplines at the Fairplex complex.

An unfortunate dismount for Varley – one of the best riders on the international circuit – saw the young British duo picked up 17 obstacle faults and 42 time faults to finish on 241 points in the riding discipline.

It meant 18 year-old Pillage and 21 year-old Varley, who are both currently training at Pentathlon GB’s National Training Centre at the University of Bath, started the laser-run event in seventh place.

A thrilling final discipline followed with the British pair closing down and overtaking the three teams ahead of them.

However, despite the second quickest laser-run of the day, they left themselves with slightly too much to do to reach the podium, eventually finish 14 seconds off the bronze medal.

Pentathlon GB performance director Jan Bartu was pleased with the fight and spirit shown by the pair as they bounced back from the setback in the ride with a very strong finish in the laser run.

Bartu said: “Jess was a bit unfortunate in the ride, she was just caught off guard on one corner as her horse turned back in. However, these things happen and it’s all experience and part of the learning curve.

“To be close to the medals was a very good performance for Jess and Myles and if one-or-two things had gone their way they might have been on the podium.”

The mixed relay rounded off the first World Cup of the 2017 season in Los Angeles.

It proved to be a successful event for Pentathlon GB athletes, headlined by Kate French claiming the second World Cup medal of her career in the Women’s competition following an outstanding display.

The next World Cup takes place in Cairo from March 22-26.