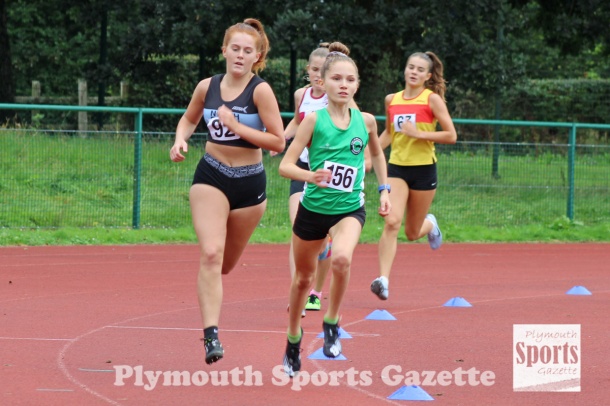 TWO young City of Plymouth athletes made their mark at meetings over the weekend.

Thrower Nubia Evans-Shields extended her lead at the top of the UK under-15 discus rankings with a personal best effort of 35.46m at the Bournemouth Throws Invitational Trial on Sunday.

The previous day, Evans-Shields, who is in her first year at the under-15 age group, had thrown 31.56m to claim victory at the Newquay & Par AC Throws Series.

She leads the national rankings by a metre-and-a-half, despite only competing at four events this year.

Meanwhile, her club colleague Molly Shorey moved up to fifth in the UK under-15 rankings with a personal best time of 4:48.11 for the 1,500m at the BMC Gold Standard Races at Lee Valley.

Shorey is the top-ranked first-year under-15 and her run at the weekend knocked more than six seconds off her previous best time for the distance set last year.

Fellow Plymouth athlete Hannan Gellatly won the under-20 women’s hammer at the Yeovil Summer Field Open with a throw of 44.14m. Her best this year is 44.62m, which ranks her eighth in her first year in that age group.

This weekend sees the behind-closed-doors invitational British Championships in Manchester.

Reigning champion King will be the favourite in the 110m hurdles with Andy Pozzi not competing this weekend.

King is ranked 13th in the world with a time of 13.51 seconds this season, but he will face competition last year’s runner-up Cameron Fillery, who has run 13.55 this year.

Trigg will go into the men’s triple jump in confidence having jumped 15.81m last week at the Bigish Jump Fest at Lee Valley. That was not only a season’s best jump but also his best leap for three years.