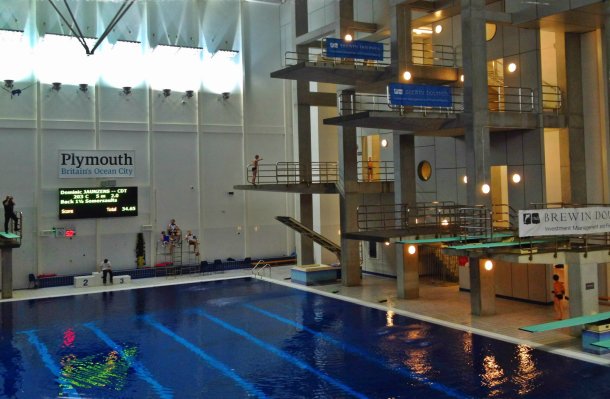 PLYMOUTH’S international swimmers and divers have suffered a major blow just one year out from the re-scheduled Tokyo Olympic Games with news that the Life Centre will not re-open until April 2021.

Plymouth City Council has confirmed that urgent work is needed on the multi-million pound eight-year-old building, which has been closed since March due to the coronavirus pandemic.

It will now be closed for a further nine months leaving Olympic and Paralympic aquatic hopefuls facing the prospect of having to move away from the city to train.

It will also be a big blow for other sports like netball, bowls, badminton, squash and climbing that use it as a base.

But aquatic stars will be the biggest hit, especially the divers, who now will have nowhere in the South West to train. They might be faced with having to relocate to London, Sheffield, Leeds or Scotland, where British Diving’s other high performance centres are based.

Swimmers will also find it difficult to train regularly in a 50m pool as the Life Centre is one of only two Olympic sized pools in the whole of Devon and Cornwall.

In a statement, Plymouth City Council said: “There have been a number of issues requiring works over the last eight years, including ongoing water leaks in certain parts of the building. During the last few months further surveys and investigations by the council and Balfour Beatty, who constructed the facility, have confirmed that major works are needed to rectify these issues.

“The works will involve stripping the pool surround and changing areas back to the base concrete before relaying them with new waterproof layers. Consequential damage to walls, ceilings, fixtures and fittings, metalwork, plant and electrics will also need to be repaired.

“The scale of these works means the centre will need to be temporarily closed until next April. Balfour Beatty have agreed that they will carry out these essential works at their own cost.:

Deputy Council leader Peter Smith said: “We’re obviously very disappointed not to be able to re-open the Life Centre later this month. We know many people will have been looking forward to using the facilities again following lockdown restrictions.

“While the centre has been closed we’ve been able to do some more detailed investigation and survey work and the fact is we are looking at some issues that need to be sorted out as soon as possible.

“If we don’t carry out these essential repairs the issues will just get worse and ultimately put the long-term future of the building at risk. We have a duty to the people of Plymouth to give them the first-class facility they deserve and one they can continue to enjoy for many years to come.

“We know the huge inconvenience this will cause, which is why we have explored all options to get the work done in the shortest possible time-frame. A partial closure – trying to keep restricted areas open around the works – would add significant time and cost to the programme and be an unpleasant, disruptive and noisy experience for centre users.

“We want to get in, get the work done and get the centre open again so that people can get back to the sports and activities they enjoy.

“While the building is closed we will be taking the opportunity to make some additional improvements and enhancements to make sure this eight-year-old building meets the needs of today’s customers – including measures to make it fully Covid-19 compliant.

We hope that customers will see some really positive changes when the centre reopens.

“The closure will clearly impact on our aquatics programmes but both British Swimming and Swim England are supportive of the works, which will improve the facility for swimmers and divers and help to secure the future of these sports in Plymouth.”

“We understand the impact that this closure will have on both the aquatics community of Plymouth and the general public who use the facilities and work in them – but we are sure the imminent improvements will help transform the Life Centre and provide positive, long-term benefits for the swimmers and divers who come through it.

“All at British Swimming and Swim England hope it is not long before exciting events like the British Diving Championships are taking place at the Life Centre once more, and we look forward to that time. In the meantime, both British Swimming and Swim England will work with Plymouth City Council to find ways to ensure diving and swimming continue to flourish in Plymouth.”

Meanwhile, Plymouth City Council have confirmed they will re-open their first swimming pools since the lockdown on August 1 with Plympton, Tinside Lido and Mount Wise main pool opening their doors.