IT WAS another case of so near, yet so far for Ivybridge on Saturday away at struggling Newbury Blues.

The Bridgers agonisingly lost 20-19 at Monks Lane, which means they are still waiting for their first win in 2020.

They had drawn 25-25 last week against second-placed Maidenhead and went down 20-16 the week before at Launceston where they had a late try disallowed.

This time it was two yellow cards at the start of each half that proved costly for them.

“It was another near miss,” said player-coach Jamie Tripcony. “It is becoming a bit of a habit.

“It was frustrating. At the start of both halves we got yellow cards and that was when they got most of their points.

“We had an opportunity at the end to win the game and we have to starting getting that right.

“We have a break next week and I think it probably is coming at the right time as we can get our minds right and physically get right.

“But the lads did put everything into the performance.”

Newbury went 12-0 up early on after Tripcony had been sin-binned.

Ivybridge did cut the gap with a try from winger Tom Scoles on 20 minutes.

The hosts kicked a penalty to go 15-5 in front before the South Hams club reduced that to 15-12 just before half-time with a try by young prop Harvey Dunn.

However, he was sin-binned at the start of the second period and Newbury got eight points ahead.

Charlie Briant scored a converted try in the 77th minute to give Ivybridge hope but they could not snatch victory at the death.

DEVONPORT Services are also without a win in 2020 after they lost 21-14 away at Bridgwater & Albion.

The defeat, which followed on from a 10-10 draw away at Sidmouth, means they are now in second spot, four points behind Chew Valley, although they have got a game in hand. The teams below them, however, are all closing up, with four teams separated by just three points.

Services paid the price for a terrible start in Somerset and found themselves 21-0 down at the break.

“We did not start playing until the second half,” said Devonport team manager Kieran Leach.

“It was not a good first half. We let them get on top of us. They were quicker to the rucks than us.

“We got back into it second half but just ran out of time.

“If we had played the first half like we played in the second it would have been a lot different.”

Bridgwater fly-half Stuart Heal ran in under the posts to put his side ahead before Devonport had Corey Jamieson sin-binned.

And while Services were down to 14 men, Bridgwater scored two tries. Centre Will Monroe crossed the whitewash before he scored another straight from the re-start.

Devonport got themselves back into the game after the break when teenage prop Seb Tooke, on loan from Plymouth Albion, managed to score his first league try in Services colours.

Richard West added the conversion and it got better for them when centre Tom Goodman scored under the posts for another converted try.

But, despite their late surge, Bridgwater were able to hold on and put themselves firmly into the promotion race.

There was better news for Devonport Services’ second team who booked their place in the Lockie Cup final by beating University of Plymouth III 57-0 at Keyham on Friday evening.

It was the Ashes’ first win in four games and lifts them off the bottom of the table and up to 12th above Honiton and Tiverton.

In previous weeks, Saltash have paid for a slow start but they changed that in Devon on Saturday by scoring two tries inside the first seven minutes.

Back Ryan Cruickshanks got their first, which was converted by Kieran Down, before Todd Crofts went over for their second.

Tiverton responded with one of their own before Down kicked a penalty to give the visitors more breathing space.

The home side closed the gap to seven points with a second try but Saltash went in at the break 22-10 up after try-machine Will Morton went over the whitewash.

The second half was a tighter affair and it became scrappy. Tiverton closed the gap again with another try but the Ashes sealed victory and crucially denied the hosts a point with a Down penalty.

TAVISTOCK boosted their hopes of staying in the Cornwall/Devon League after securing a crucial 39-21 victory over bottom side South Molton at Sandy Park.

Second-row Leion Cole was the man of the moment for Tavistock with a hat-trick of tries.

The win has moved 12th-placed Tavistock to within three points of 11th-placed Liskeard-Looe, who do now have a game in hand after their match with Exeter Athletic was postponed on Saturday due to the weather.

Tavistock knew if they did lose to South Molton then their hopes of escaping the drop would be pretty tough.

Now they have a chance and have a new head coach to try and secure their safety. Joel Caddy has taken over at Sandy Park following James Reyburn’s move to New Zealand.

“It was a decent performance to bounce back from last week,” said player-coach Hammy Kerswill.

“It was an important win but there’s lots of hard work to go in still.

“The win was welcomed by Joel Caddy, who has joined us to replace James Reyburn as head coach. James has moved to New Zealand after being offered a job in Auckland.”

Cole got Tavistock off the mark when he exposed a gap in midfield and finished off well. That try was converted by Jack Easton.

Cole bagged his second not long later when he went over from close range and Easton again converted.

After the interval Jack Glover scored Tavistock’s third of the afternoon when he collected a good Tom Pearson box kick.

Dan May got South Molton off the mark with a try before Easton kicked a penalty in front of the posts.

Cole then secured his third touch-down before the visitors were awarded a penalty try and Tavistock had Duncan Law sin-binned.

Ethan Lamerton got Tavistock’s fifth after a good backs move before Martin Budden scored an opportunist try from the base of a scrum. Tom Worsley scored a late try for South Molton.

Plymstock Albion Oaks’ promotion hopes were dented on Saturday when they lost 35-17 away at Topsham.

Sam Snell got one back for Oaks just before half-time and Harry Groves adding a second after the interval, but Topsham responded with a fourth try to go 31-10 ahead. Dan Romang got a third for Oaks but it was not enough to return with any points.

They have dropped down to fourth in the table, but they are only five points behind second-placed Paignton, who lost to leaders Truro.

“Topsham were very well-drilled,” said Oaks coach Aiden Taylor. “It was a battle of the backs and theirs came out on top. They have got some very good players, but we were not clinical enough.” 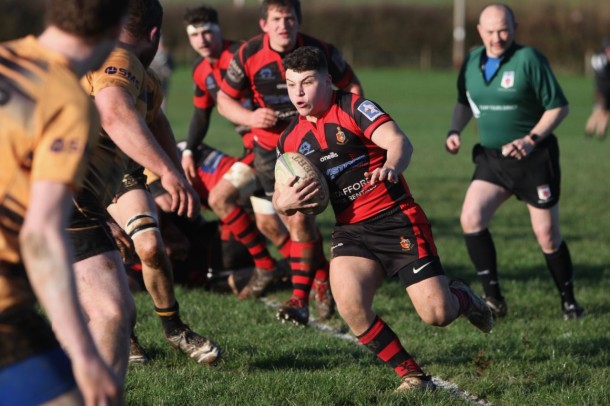 PROMOTION-chasing Tamar Saracens managed to edge out their big rivals Old Techs 29-22 in a highly-entertaining derby clash at Weston Mill.

The match not only counted for the league, but was also a Lockie Cup quarter-final.

It was the third time the teams had met this season in league or cup games and all have been close, but this was the closest.

Sarries went 12-0 up with tries by Adam Corbett and Rikki Brandham, but Techs hit back and they took a 14-12 lead into the break thanks to two tries from winger Rob Keach, which were both converted by Billy Evans.

Tries by Frazer Tatchell and Joe Stanniforth after the interval put Sarries 24-14 up but back came Techs again, with a try from Sam Courtney to make it a one score game.

“It was one of those games that could have gone either way,” said Tamar Saracens head coach Pete Lethbridge. “Techs played really well. It was a really good game and we just had enough to get over the line.”

“We were happy with the way we played but we have to get that winning mentality back.”

OPMs are up to third in the Devon One table after they comfortably beat Torrington 38-0 at King George V Playing Fields.

The Old Boys scored 19 points in each half to complete the double over Torrington.

Mat Mann and Fred Smale both scored twice for the Old Boys with Chris Harmer and Ben Neville also touching down. Sam Matts converted four of the tries.

“The game was a bit flat by us,” said OPMs captain Billy Garratt. “We probably left about four or five tries out there as we struggled to make the last pass or finish it off. But it was still a decent performance to get a five point win and not concede any.

“Credit to Torrington as they had to play with 13 towards the end of the game due to injuries.”

Plymouth Argaum were brought back down to earth after their win over Old Techs last weekend as they were beaten 68-0 away at unbeaten league leaders Withycombe.

Argaum held Withycombe for a while before they went 26-0 up at the break. In the second half the Exmouth-based club ran away with it. They finished with 10 tries, with Luke Davies bagging four of them.

Boosted by some of their colts, Kingsbridge had more players than they needed, unlike Plym Vic who had just 15 and ended up down to 12.

However, Plym Vic did have the upper-hand up front, dominating the scrums and line-outs, but Kingsbridge’s young backs exploited any space they did get.

Plym Vic did manage three tries courtesy of two from Chris Barrett and one from Dan Warne.

“It was disappointing we did not get the bonus point,” said Plym Vic’s Chris Hunt.

“They are a good side and they had about 35 players to pick from. I think most people enjoyed the game but they had the making of us in numbers and fitness.

“Our pack did over-power them but they are very quick and you can tell they train with their first team.”