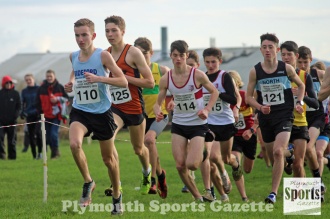 TAVISTOCK Run Project’s Oliver Smart and City of Plymouth’s Molly Shorey and Barnaby Hutchings were among the race winners at the third Westward Cross Country League meeting at Exeter on Sunday.

The event incorporated the Devon County Championships, which strengthened the fields.

Jennings and Smart pulled away from Livingstone after the first lap. Smart then sat on Jennings’ shoulder for much of the race before taking the lead in closing stages to win by three seconds.

Smart clocked 15.21 minutes, with Jennings coming home in 15.24 and Livingstone taking third in 15.59 minutes. There were also the top three in the Devon Championships. Tavistock’s Will Russell was 10th in the county race.

Shorey showed her class in the under-13 girls’ race which City of Plymouth dominated, with five runners coming in the top eight of the Westward League run.

Shorey took victory in both the league and county event by 19 seconds ahead of Bideford’s Freya Woodhead. City of Plymouth team-mate Holly Reid, who won the Cornwall title last month, was third, with Molly Gilbey fifth, Madeleine Jones seventh (4th Devon) and Verity Tank eighth overall and fifth in Devon. Erme Valley’s Bella May, City of Plymouth’s Isabella Morris and Taivstock’s Piper Haffenden were all in the top 10 of the Devon Championships.

Hutchings won the under-11 race, which was just a Westward League run and not a county event. He finished five 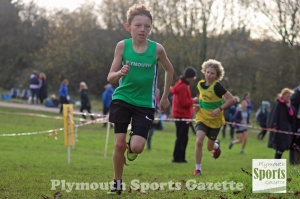 Fellow City of Plymouth athlete Thomas Jones was third overall and second Devon athlete in the under-15 boys’ race. Exeter’s Samuel Mills won in 13.35 minutes, with Cornwall’s Zak Clemens taking second overall in 13.40, with the strong-finishing Jones just behind in 13.41.

Tavistock’s Ewan Dix was sixth overall in the same race and fifth in the Devon event, with team-mate Abe Reid seventh in the league race and sixth in Devon.

Plymouth College athlete Chloe Olford, who runs for Newton Abbot, was sixth overall in the women’s league race and second under-20.

There was a top five finish for Tavistock Run Project’s Ben Neale in the senior men’s league race. He finished behind Exmouth’s Tom Merson, Bideford’s Ronnie Richmond and Mark Jenkin and Exeter Harriers’ Ben Holmes. Neale was fourth in the Devon event.

Plymouth Harriers’ Johnny Gilby was eighth in the main race and fifth and first M40 in the Devon competition, with Jordan Andrews just behind in ninth overall and sixth in the county event.

In the under-15 girls’ race, Tavistock’s Charlotte Walker was sixth overall and fifth Devon athlete, while there was also a top 10 finish for team-mate Claudia Jones in the under-11 girls’ race.