THERE were mixed feelings inside the Ivybridge camp after they drew 25-25 at home to Camborne on Saturday in South West Premier.

The Bridgers felt they should have won the game after going 15-0 up after, but in the end they needed a late penalty by Matt Grieveson to take a share of the points.

“The boys were quite disappointed with that, especially as we were at home,” said Ivybridge player-coach Jamie Tripcony. “They were frustrated after the game.”

Ivybridge had been looking to bounce back from their defeat the previous week against Brixham, where they had to settle for a bonus point.

“The only positive is we are picking up league points,” said Tripcony. “But they are two games that we could have won. We just have to keep working hard.”

He added: “We managed to get in front by playing some good stuff (on Saturday), but they came back at us – and all credit to Camborne for that.

“But it was quite frustrating as our discipline let us down and allowed them back into it.”

Grieveson kicked an early penalty to put Ivybridge ahead. They increased that with a try by centre Jordan Anderton, which Grieveson converted.

The South Hams club had centre Will Lamont sin-binned but they coped well with 14 men and they increased their lead to 15-0 when they were back to full strength with Robin Luscombe scoring.

But in the last five minutes of the first half, Camborne kicked two penalties to get back into the match.

After the interval the Cornish club cut the gap further with a try and then went 20-15 in front before Lamont restored Ivybridge’s lead with a try on 71 minutes.

It looked like Camborne had won it when they scored in the 77th minute but Ivybridge got a penalty with time running out and Grieveson calmly slotted it over.

COREY JAMIESON scored four tries as Devonport Services moved back to the top of South West One with a fine 38-12 victory at Keynsham.

It is the second time this season that the former Plymstock Albion Oaks winger has bagged four tries in a game, having also achieved it on the opening day of the campaign against Newton Abbot.

“He has been fantastic,” said Services coach Mike Lewis about Jamieson’s form since jumping up two divisions in the summer. “He’s got that bit of awareness and evasiveness, like Kyle (Browne). When we get the ball to them they are fantastic.”

Browne also bagged a try in Somerset as Services made sure they did not slip up away after big home wins against their promotion rivals Thornbury and Hornets.

“We talked about that not letting it slip with a typical Services away performance,” said Lewis.

“But our attitude on the way up was fantastic and it also was in the warm-up and so you just felt it was going to be good. We dominated up front and in the scrum.

“It was a really good weekend for the club with the seconds beating Ivybridge on Friday night and then the thirds beating Torpoint in the (Ellis) cup.”

Richard West put Devonport ahead at Keynsham with a penalty kick. But Keynsham, who went into the game in sixth spot, scored the game’s opening try to take a 7-3 lead.

Browne then got on the scoresheet when he scored from a well-worked scrum move with Dylan Daley putting him clear. That gave Services a 20-7 half-time lead.

That was increased early in the second half when West kicked another penalty before the hosts got a second try.

But Devonport finished strongly. West kicked another penalty before Jamieson got his hat-trick.

Jamieson then added his fourth with an outstanding individual effort that saw him beat five players – he side-stepped a couple before handing off the others. 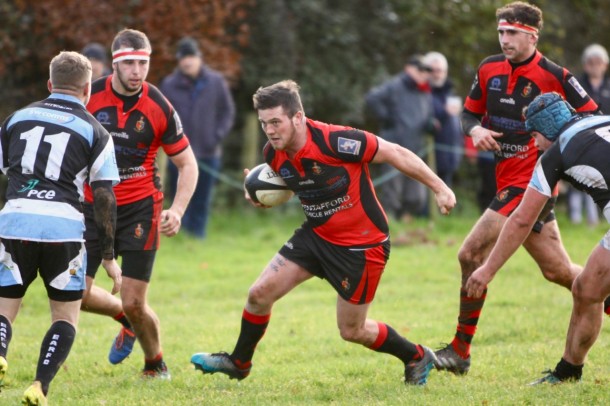 Saltash moved off the bottom of Western Counties West with a tremendous 43-12 home win over fellow Cornish side Falmouth at Moorlands Lane.

The victory has moved the Ashes up to 12th, with Tiverton and Wiveliscombe now making up the bottom two.

Saltash have only won two league games this season but in both they have scored more than 40 points – they beat Tiverton 40-14 at the start of October, which until Saturday was their best result in Western Counties West.

The Ashes had been frustrated to lose 25-23 at Cullompton the week before. Cornwall winger Will Morton had missed that game but he was back on Saturday and he opened the scoring against Falmouth with a try on 15 minutes, which Kieron Down converted.

That was quickly followed by a touch-down by fellow Cornwall player Lewis Wells before Falmouth came back late in the first half to level the game.

But in the second half it was one-way traffic with Jay Moriarty, Ben Hocking, Devon Bennett-Murray, Todd Crofts and Kyle Felton touching down for the Ashes and Down adding the rest of the points. 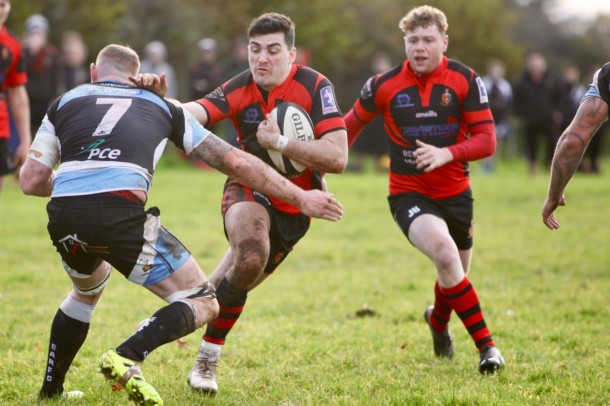 TAVISTOCK finally got their first win of the season as they ran in four tries to overcome fellow strugglers Exeter Athletic 28-5 at Sandy Park.

Tavistock had felt a victory had been coming and now that they have got one they will be hoping they can really push on.

They are off the foot of the table now and just four points off getting out of the bottom three.

“This win was a reward for the last two weeks,” said Tavistock player-coach Hammy Kerswill.

“We have been very good in our last two games (against Bude and Truro) but just up against more experienced sides.”

Tavistock have struggled this season when they have gone behind early but on Saturday it was them that set the pace, going 21-0 up after just 20 minutes.

With the match moved to their second team pitch due to the weather, Tavistock were awarded a penalty try after just seven minutes.

It then got better for them as flanker Jamie Legg added a second try, which Rob Pratt converted, before Sam Northmore scored a controversial third after stealing the ball off Exeter’s scrum-half at a ruck on the try-line. Pratt again added the conversion.

Exeter did come back with a try from Ben Newman before half-time but Tavistock were not going to be denied this week.

They wrapped up the game and the bonus point in the second half when captain Andrew Schuttkacker scored.

Plymstock Albion Oaks have moved to the top of the table after beating Liskeard-Looe 26-12 in a joint league and Lockie Cup double-header at Horsham Fields on Saturday.

Oaks did get the bonus point win but Liskeard made them work really hard for it in tricky conditions.

Plymstock found their Plymouth Combination rivals really tough to break down and they were only 12-5 up at half-time.

Number eight Tim Coats and player-coach Aiden Taylor scored tries for the hosts in the opening 40 minutes, with Sam Brown replying for Liskeard.

After the break, Tom Richards put Dave Byng in for a try after some good passing before Taylor got his second and Oaks’ all-important forth. Liskeard got a second try through Adam Powell, which Nick Parker converted.

“It was not easy,” said Oaks coach Taylor. “They (Liskeard) really came at us and their scrum was really good, but our quality came through in the end.

“It was a bonus point win, but we did not really play our normal game.

“You have to learn to play the conditions and the ref but we did not really do that. We do need to address our discipline.

“But we have gone top of the league and it is really nice to be there.”

THERE was home disappointment for Plymouth Argaum and Old Techs on Saturday in Devon One.

Argaum went down 15-12 to Dartmouth at Bickleigh Down, while Techs lost 34-12 to second-placed Exeter Saracens at Weston Mill.

OPMs, meanwhile, were handed a home walkover by Ilfracombe, while Tamar Saracens’ game with Buckfastleigh was postponed due to a waterlogged pitch.

Argaum were frustrated not to beat Dartmouth. They certainly had their chances to get their third league win of the season but did not take them.

They went 12-0 down in the first half after Colin Cranfield and Luke Bonstow scored out-wide for the visitors.

Argaum missed a penalty before the break but they did get back into the game in the second half and pulled it back to 12-12.

First, 18-year-old winger Drew Preston scored a try on his debut for Argaum before Tom Bradshaw crossed after good work from Joe Martin.

Argaum were penalised for a double movement when it looked like they were going to score a third and they also knocked on when they were in a good position.

And they were to pay for their lack of a clinical edge when they were penalised for a high tackle and Luke Chase put over the kick to win the game for his side.

“We actually played very, very well,” said Argaum secretary Stuart Quarterman. “We were a bit unlucky to be 12-0 down at half-time but we really upped the tempo after the break.

“And everyone was really positive after the game as it was the best game we have played for a while.”

Old Techs played their first game since the death of their prop Shane Hedges.

Not surprisingly after what had happened, Techs took a while to get going and in-form Exeter Saracens took advantage to score three early tries.

But gradually Techs got into the game and had some really good spells of pressure, but unfortunately the damage had been done early on.

Matt Simmonds did get two tries for them, one converted by Billy Evans, but they couldn’t manage to get anything out of the game.

“The first 20 minutes we were not in the game,” said Techs coach Shaun Bedford-Smith. “We were slow out of the blocks, understandably.

“I always thought it would be a tough game, but we started controlling the game after we tightened up.

“But the referee got injured in a collision and, although, he eventually got up and hobbled on we lost some momentum and they scored two quick tries.

“But we kept battling and I couldn’t fault any of the players. It was a hard game for them and it was emotional.

“I was just happy that we went out and played and everyone gave it their best.”

In the Devon Merit Table, DHSOB celebrated their 90th anniversary in style by beating Torquay Athletic II 46-10 at Stonehouse Creek.

Torquay agreed to an early kick-off so that DHSOB could play the game and then everyone could move to Brickfields for an anniversary celebration at Albion’s game with Chinnor.

“We had in excess of 70 people who went to Albion to celebrate our 90th anniversary,” said Mike Freeman.

“It really was a tremendous day. We played really and it was a very good game.”

The Old Boys had a front-row made up of club stalwarts Steve Poole, Ian Nichol and Darren Rosevear, but it was their Fijian contingent that stole the show with some champagne rugby to match the occasion.

The hosts led 17-10 at the break with tries by Pyas Bula, Ben Bussami and Steve Chapman. After the interval they pulled away with tries by Shaum Mucunabitu, Poole, Silibalau and Rosevear.

There was also a win for Plympton Victoria, who overcame the University of Plymouth III 17-14 at St Mary’s, thanks to a hat-trick of tries for Dan Warne.

“It was nice to see the lads building a bit of control in a game and sticking to a plan,” said Plym Vic’s Chris Hunt.

Plym Vic’s forwards won them the game. They particularly impressed at the scrum where they won a number of balls against the head.