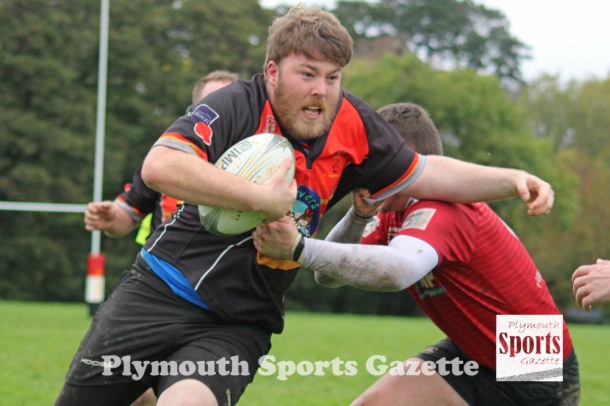 IVYBRIDGE returned to winning ways in style on Saturday by becoming the first team to beat Barnstaple this season.

The Bridgers, who had lost their last two matches, triumphed 15-12 in tough conditions at Pottingham Road in the league and Devon Senior Cup double-header.

Barnstaple had gone into the game as South West Premier league leaders with six wins out of six to their name, but have now dropped down to second, while Ivybridge sit in sixth spot.

“It was a very good win for us,” said Ivybridge head coach Gareth Elliott.

“It was one of those games where both defences were strong. We defended unbelievably well throughout the game. That was really what won us it. Defensively the lads really put in a shift.

“We stopped their threats most of the time. We knew they had a strong set-piece side and we knew we had to stop that and we did that really, really well and capitalised on a few opportunities when we got a chance. It was just a really good performance.

“It was a bit scary at the end as they made a bit of a comeback late on, but the lads held on and full credit to them for grounding out a big win away from home.”

After defeats to Okehampton and Weston-super-Mare, Ivybridge were desperate for a win before a week off.

“It was good to win before we have a break weekend,” said Elliott. “But we have actually been playing pretty well. The Okehampton game was a tough situation with the injuries and everything and the Weston game was just really our ill-discipline.”

Ivybridge missed an early penalty against Barnstaple on Saturday and it looked like the teams might go in at the break at 0-0. But Matt Grieveson managed to edge the visitors 3-0 up with a penalty towards the end of the first half.

After the interval Barnstaple went 7-3 ahead with a try by Brendon Darly, which Kyran McManus converted.

Yet back came Ivybridge with a try by Ben Watts to make it 8-7. Prop Jon Morgan then made it 15-7 with a rare touch-down, which Grieveson converted.

Barnstaple gave themselves hope with a late score by Winston James but Ivybridge were able to hold on for a valuable league and cup four points.

DEVONPORT Services suffered a second defeat of the season when they went down 13-7 at newly-promoted Crediton in a Devon derby at Blagdon.

Services had gone into the game as South West One league leaders, with their only previous defeat a narrow 26-24 at fellow high-flyers Chew Valley.

But they never got going at Crediton in the league and cup double-header and to make do with just a losing bonus point thanks to a late Matt Gregory try, which Richard West converted.

The loss drops Devonport down to second in the table, but they have played a game less than new table toppers Thornbury, who they meet next.

“It was one of those days,” said Services head coach Mike Lewis. “It was a typical Devonport Services away performance where we are not quite switched on.

“It did not help that the windscreen wipers came off the bus at Ivybridge so we had to go back and get another bus, but that should not affect our preparations that much.

“We just weren’t at the races. I think quite a lot of heads were still on the bus for 40 or 50 minutes of the game. We woke up in the second half a bit, but we weren’t all going in the same direction. There were a lot of individuals out there rather than a team.”

He added: “Crediton’s defence was fantastic. It’s the best defence we have come up against this year.

“We struggled to break them down. We did have the opportunity to score a couple more tries but they slapped the ball down – knocked it out of the air – but the referee only saw fit to give penalties when they were both try scoring opportunities. We also didn’t get the rub of the green a scrum-time.

“But even if the referee was the best in the world we probably still wouldn’t have won as our attitude was not quite right.”

In Western Counties West, Saltash went down 30-14 away to third-placed Bideford.

The Ashes, who sit bottom of the table with just one win to their name, once again were competitive but just could not get anything out of the game.

At half-time they were 18-9 down, with Kieron Down kicking three penalties for them. They went 23-9 behind after the break but cut the gap to 23-14 with a try by Jay Moriaty.

And that was how the match stayed until the dying seconds when Bideford scored a fourth try to bag the bonus point. 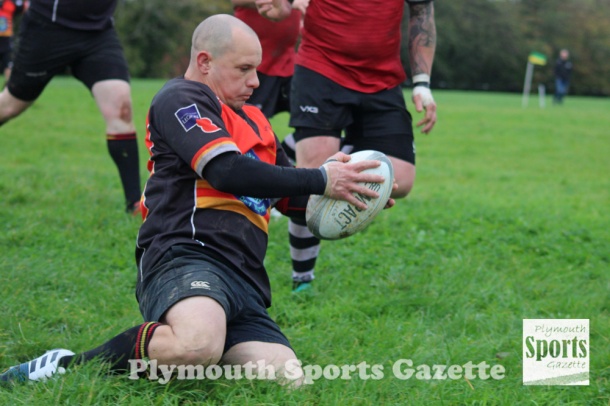 PLYMSTOCK Albion Oaks’ poor record against Bude continued as they were beaten 22-6 at a wet and windy Bencoolen Road on Saturday.

It was only Oaks’ second defeat of the season and the first time they had not managed to score a single try in a game.

Plymstock just do not seem to like playing Bude. The north Cornish club ended Oaks’ 10-game winning run at the start of last season before hammering them at the end of March to end the Devon club’s hopes of promotion.

Bude, who had lost their three previous games, were only 7-6 up at half-time thanks to a try by Ryan Butler, which full-back Olly Denford converted.

The hosts, though, pulled away in the second period with winger Rory Hodges scoring two tries, one of which was converted by Denford, who also kicked a penalty.

Oaks had to make do with two penalties on Saturday and they have dropped down to third after the loss.

Tavistock and Liskeard-Looe both had their Cornwall/Devon League matches postponed on Saturday. Tavistock should have been playing high-flying Torquay Athletic away, while Liskeard-Looe were due to host North Tawton, but both games were called off due to waterlogged pitches. 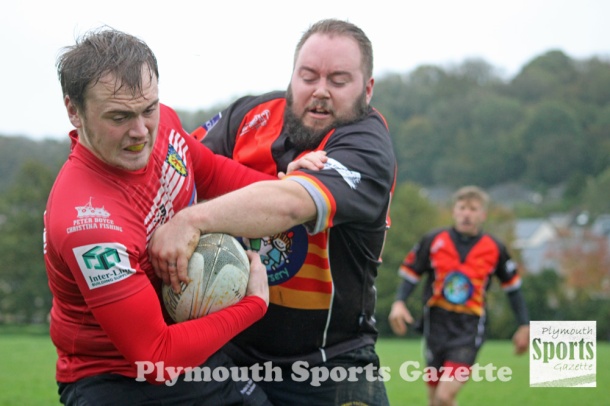 TAMAR Saracens suffered their first defeat of the season when they narrowly went down 6-0 to leaders Withycombe in a top-of-the-table clash in Devon One.

Both teams had gone into the game unbeaten and there was hardly anything to choose between them in tough conditions at Raleigh Park.

In the end just two Glenn Channing penalties – one in each half – decided the match.

Although Sarries head coach Pete Lethbridge was happy to at least pick up a point from an away game at Withycombe he felt his team did not play at their best.

“We really didn’t get going,” said Lethbridge. “But at least we got a losing bonus point out of it, so I’m quite happy with that.

“But I think the boys are disappointed and a bit cheesed off because of the way they performed.

“I think if we had played as well as we could then we could have made a big statement up here, but we were a little bit lacklustre all round the park.”

He added: “Decision-making let us down. Our forwards were better in the scrum this week but our line-out let us down this time.

“It was horrendous conditions but it was playable. Withycombe are a good, organised side who are very strong in the forwards. It was a good battle, but I think we could have done better.

“But we got a losing bonus point and it’s good we didn’t concede a try as they have been running in some scores this season.”

OPMs recorded their biggest win of the season as they crushed last season’s fifth-placed finishers Buckfastleigh 46-8 away from home.

Martin Skelly again lead the way for the Old Boys with a hat-trick of tries, which all came in the second half.

The Plymouth side were only 15-3 up at half-time thanks to a Sammy Matts penalty and then tries by Paul Bright and Mark Hardie.

But OPMs really turned up the pace in the second period. Skelly got his hat-trick while there were also second-half tries for captain Billy Garratt and Ben Neville.

OPMs stay fourth in the standings behind Withycombe, Tamar Saracens and Exeter Saracens.

Plymouth Argaum suffered another heavy defeat as they went down 53-12 at Torrington.

It was the second week running Argaum had conceded more than 50 points having lost 55-7 against Tamar Saracens seven days earlier.

Argaum had one win and two draws from their opening three games but have not won since and find themselves second from bottom having lost five points for not travelling to Withycombe at the start of October.

Karl Sullivan scored both Argaum’s tries at Torrington, with scrum-half Luke Nicol converting one of them.

Old Techs were frustrated to be left without a game after their match away at Totnes was postponed due to a waterlogged pitch. Techs had been hoping to build on their first win of the season last weekend.

In the Devon Merit Table, Plympton Victoria claimed their biggest win of the season as they overcame Brixham Albion 48-3 at Underwood.

Plym Vic were always in command against the makeshift Brixham team that featured a couple of Tamar Saracens players, but it was only in the final 20 minutes when they scored five quick-fire tries that they really pulled away.

Dan Warne had given Plym Vic an early lead with a try from close range. The hosts were dominating the scrums and it was no surprise when they added a second try on 26 minutes courtesy of scrum-half Sam Wilmington.

A third followed on 34 minutes when Warne was ruled to have grounded a ball after Brixham got in a mess in their own in-goal area after pressure from a scrum.

The visitors did have some pressure at the end of the first half but Plym Vic defended well.

Brixham did get some points on the board at the start of the second period when Reece Titheridge kicked a penalty but that was as good as it got for the visitors.

A try by centre Chris Rundle on 63 minutes was the start of a mad period which saw Plym Vic score straight from the next four re-starts.

Number eight Matt Trotter scored straight after Rundle when he ran in from 50 metres for a try that Zac Hoole converted.

Then fly-half Lee Pringle scored from the next re-start after Rundle fed him.

Next to go over the whitewash was lock Conor Turner before Wilmington finished the try scoring with a 40-metre effort. Hoole ended up with four conversions.