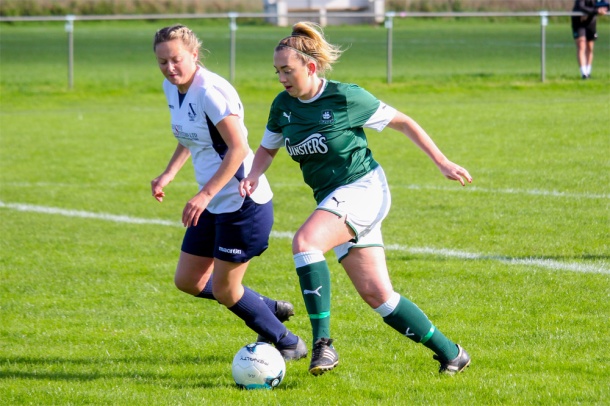 PLYMOUTH Argyle Ladies do not have a chance to build on their impressive form this weekend as they are left without a match.

The Pilgrims have won six consecutive National League Southern Division games to sit third in the table. They are only one point behind Watford and Crawley and have played a game less.

Argyle currently have the best defence, best attack and best record in the league.

“It is so frustrating to be without a game,” said manager Dave Leonard. “But at least it will give a couple of the girls a chance to recover from some niggling injuries.

“And it’s nice they can have a weekend away and have a bit of time off as we are coming up to a very heavy schedule before Christmas.”

But Argyle’s development team are in action. They entertain Feniton in the first round of the League Cup just seven days after coming away from the east Devon club as 9-5 winners to go top of the South West League Western Division.

The cup is a target for the development team, who will be playing their first cup match since they were re-formed four seasons ago.

They do have to make changes to their squad. Missing through injury will be young centre-half Leah Johnson, who suffered a groin injury against the same opponents last week. Also unavailable to the squad this week will be influential midfielder Ellie Bishop, Hannah Brock and defender Jodie Randall.

Exciting teenage winger Beth Everson will have a fitness test before the game on her injured ankle.

Injuries, though, will open the way for some of Argyle’s under-18s to come in and impress.

The team are buoyant after their recent run of results but the management team will make sure there is no complacency when they take to the field.

Manager Rob Bonney said: “Our overall play last week was some of the best we have played all season but we need to make sure we don’t make the elementary basic errors that we made.

“Feniton will certainly be looking for revenge and we certainly respect them as a football team. Last week is done and dusted and Sunday we go again.”

This will be the development team’s first competitive game at the Manadon Sports Hub and they are hoping that spectators will come to the excellent facility and cheer them on. Admission is free and kick-off is 2pm.