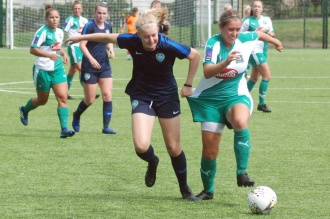 PLYMOUTH Argyle Ladies got their season up and running thanks to an excellent 2-0 away victory at Gillingham in the National League Southern Premier Division on Sunday.

The Pilgrims went into the game on the back a 2-0 defeat to Crawley Wasps in the league and a shock 4-3 loss at Devon rivals Exeter City in the League Cup.

This focussed the team’s minds and they travelled up the day before the match to ensure they had the best preparation. It proved a good decision as they produced a professional performance in Kent.

The side were cheered on by a number of fans who came down from the Argyle London Supporters’ Branch, who chatted and congratulated the players afterwards.

Manager Dave Leonard said: “We were really grateful for these fans turning up and the girls really appreciated it.”

Argyle suffered a blow before the kick-off with right-back Leah Burridge ruled out after been taken ill the night before. With Helen Bleazard, who would have taken over that role, also unavailable, Leonard decided to pit 16-year-old Beth Everson in at right back. She had been playing youth football last season.

Leonard said: “The youngster did really well – it was her full senior debut and she was very good.”

Argyle started with Ebony Dover and Holly Cole on the bench, with Zoe Cunningham returning from injury and slotting into the midfield. Mollie Taylor was at the back, with Natasha Knapman, who also missed the Exeter game, starting up front.

And Argyle got just the start the needed at Gillingham when a flowing move ended with Becky Dandridge breaking clear before firing low into the corner of the net from the edge of the penalty area.

This goal settled the Pilgrims down and they almost doubled their advantage when Mollie Taylor got a header in from a corner, but it just went over the crossbar.

After Jade Keogh had also fired over the bar at the other end for Gillingham, Argyle then had a dramatic escape when two home efforts struck the woodwork.

Keogh then fired a free-kick over the crossbar before Gillingham hit the woodwork for the third time through Alice Bussey.

The game settled down until two minutes before half-time when Amber Pollock blazed an effort over the crossbar.

Three minutes into the second period and teenager Beth Everson had an effort blocked.

But within minutes Argyle had doubled their lead when predatory striker Knapman got her season going when she ran on to a through ball to shoot past advancing goalkeeper Cara Davies and into the far corner of the net.

Gillingham responded and on the hour mark Alice Bussey was denied by a superb save from goalkeeper Becky Kyle. This save proved to be the turning point in the match as it gave the whole Argyle team the confidence to hold on for the win.

The visitors did almost increase their lead eight minutes from time when Becky Dandrige intercepted a kick from Davies to set up Jessie Jones, who shot wide.

After the match Leonard said: “It would be unfair to pick out any individual. We had the basics right, the application and the desire and we stuck to our game-plan and it came through. But to be honest it was great to get some local support which was greatly appreciated.”