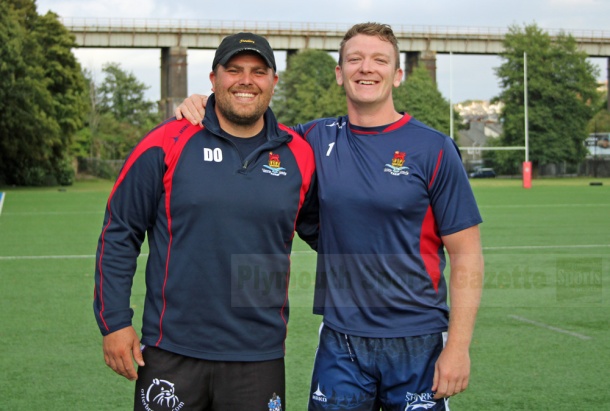 KYLE BROWNE has followed in the footsteps of fellow county back Tom Goodman and returned to Devonport Services.

The 30-year-old winger left the Rectory more than a decade ago to play at a higher level.  He had four seasons at Brixham, who Devonport will entertain in a pre-season game on Friday night, and six at Newton Abbot. He also had brief spells at Tavistock and Launceston.

But like with Goodman, who returned to Services last month from Brixham, Browne is keen to help his first club push on and hopefully win promotion to the South West Premier.

“I think it has been 11 years since I was here last so it has been quite a long time,” said Browne.

“I have got a bit fed up of the travelling to training and I wanted to come back to this club. Just to be back at your home club is nice – it’s like the feeling of living aboard and coming home.

“I know quite a few of the guys here and so I will be playing with friends. I am really looking forward to it.

“The club is going in the right direction and getting promoted (to South West One last year) was good. I don’t think there is too difference in the levels (between South West Premier and South West One). Hopefully, I can bring a bit of experience, a bit of magic and a lot of tries.”

Browne is joining Services to try and get them promoted. He was impressed by what he saw from them last season on their debut in South West One.

“Services were right up there but that Launceston game, that they narrowly lost, was the decider,” he said. “Hopefully we me, Gooders (Tom Goodman) and a few other experienced players coming in we can just add that bit that they lacked last year and also bring some more depth.”

Browne could get his first outing on Friday against Brixham, while his first league game could come against his other former club Newton Abbot.

Services head coach Mike Lewis is delighted to have another player with higher league experience and connections to the club join for the 2019-20 season.

“I think that’s just what we missed last year – that bit of leadership – as we have quite a young side,” said Lewis.

“Young players expect some older heads to give them a bit a direction and point them in the right way. Just having people like Kyle, Tom Goodman, Westy (Richard West) and Rhys (Williams) in the backline – whether they are all playing or just one of them – should make it quite vocal.”

Lewis hopes having even more depth in their squad can take them to another level this coming season.

“We had two really competitive teams last year,” he said. “The twos played really well and could have may be pushed on and finished in the top two (in the Devon Merit Table) if they’d had a couple more wins against the other top four teams.

“We have got a lot of depth in the squad this year and hopefully we will have two even more competitive teams enjoying their rugby.

“Every player at our level are amateurs and have jobs, partners, families and so are not always available every week so it is great to have that bit of depth in terms of senior players.”

Services are likely to give many of their squad at least half a game on Friday at the Rectory against South West Premier side Brixham (7.15pm).

“We are just looking forward to getting out there and just doing the stuff we have been doing in training,” said player-coach Richard West.

“It should be good. Obviously they are in a higher league, but with the signings we have made and how we have been training, I think it will be good preparation to see how we are going to go.

“It’s about building in pre-season. This is the first chance to get a full game under our belts and it should be good.”

Services will follow the Brixham match with a training run-out against Plymstock Albion Oaks and their regular pre-season fixture against Saltash.

Oaks have added to their squad by signing Devon Under-20 back-row forward Nathan Davies from Ivybridge and back three player Lewis Roddy from Plymouth Argaum.