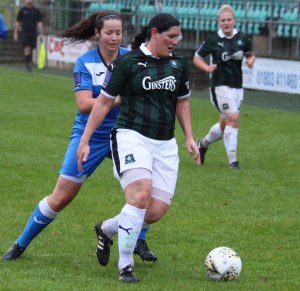 PLYMOUTH Argyle Ladies continued their good pre-season form when they followed up their 8-3 win over Exeter City with an 8-0 victory at Bishops Lydeard.

The Pilgrims were without seven first-choice players, which enabled manager Dave Leonard to have a look at the likes of Danni Wyatt, Ellie Bishop, Beth Everson, Kiara-Jade Robins, Holly Cole and another 16-year-old Beth Cowd.

Playing on a superb surface, Argyle took the lead through Natasha Knapman, with skipper Katie Middleton adding the next.

The goals kept coming at regular intervals, with the lively Amber Pollock making it 3-0.

Jessica Jones then got in on the act before another youngster Cole made it 5-0.

Argyle continued to press and 16-year-old Beth Iverson was the next on the score sheet.

The Somerset hosts continued to battle hard, but Argyle made it eight with Jones and Pollock both netting their second goals.

Leonard said afterwards: “They (Bishops Lydeard) put up a brave front. Like any pre-season friendly we had to go out there with the right attitude the right respect and we showed that throughout the whole game.

“We worked on a few new things I wanted the girls to do but there is still a lot to do – we are nowhere near the finished article.”

He added: “We went there with a depleted squad but Ellie Bishop did exceptional well in midfield she had a really good tidy game. Danni Wyatt settled into the number 10 role and played really well, while 16-year-olds Beth Everson and Beth Cowd showed up really well.

“It was a good work out as far as I was concerned. There were a lot of positives again scoring goals, but for me next week will be a massive test against Bristol City.

“I would like to thank Bishops Lydeard for the fantastic hospitality and excellent pitch.”