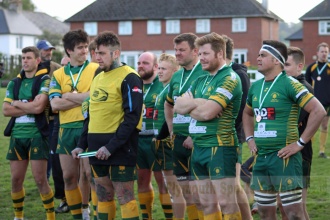 They did lead the table for quite a while and were still in the running for promotion going into the final six weeks of the campaign.

Although they slipped off towards the end to finish behind Penryn, Honiton and Bude, they have taken a lot of confidence from last term and are keen to push on in 2019-20.

Player-coach Aiden Taylor has agreed to stay with them and they are busy trying to strengthen the areas they need to try and improve on fourth place.

They might have lost star back Corey Jamieson to Devonport Services, but they have already brought in Adam Walker and Calum Mills from Plymouth Argaum and ex-Ivybridge colt Luke Austin. Former player-coach Callum Cload could also return after a season in Europe, while Oaks say they are also close to adding a few more additions.

In addition, they hope to have centre Will Booth back fit after he missed the second half of the season with a knee injury and they have also promoted South West Under-18 player Pete Keanie from the colts.

“We were such a surprise package last season and everyone was a bit shocked where we came from,” said Oaks coach Taylor. “Now everyone knows what we are about, but another year on and if we get a good pre-season behind us I feel we can be in the hunt.

“With Penryn and Honiton going up I feel like it does open up an opportunity for us.”

Hooker Taylor could have moved on this summer after finishing his degree at Marjon University, but he wants to see if he can take Oaks to the next level.

“I had some good offers from other clubs,” he admitted. “But we were really close last season and I think we could push on and maybe get into that top two.”

Oaks start their official pre-season training on Tuesday, although they have been having informal training for the last few weeks and have had good numbers.

Taylor does admit there is likely to be a few more faces still to come in.

“We have spoken to a few players and we are definitely hoping to strengthen in some areas,” he said.

“We have got a few people wanting to come up and try in pre-season.

“Hopefully, we’ll also get Will Booth fit. He’s a massive player for us. He was outstanding in the first nine games last season before getting injured.

“Pete Keanie is a second year colt but is going to commit to the senior team this season. He is an outstanding talent.”

Oaks have been handed a tricky start to the season with back-to-back away games at Cornish sides Pirates Amateurs and newly-promoted Veor.

The Horsham Fields club hope they can hit the ground running like they did last year and have once again lined up a tough pre-season fixture list.

They currently have games against Kingsbridge, Wadebridge, Tamar Saracens and Saltash pencilled in for warm-up matches.

“They are four very hard games,” said Taylor. “But we had hard games last pre-season. We lost all three of our pre-season matches last year but then went on a 10 game unbeaten run at the start of the league season.”