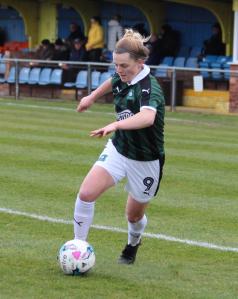 PLYMOUTH Argyle Ladies go into their final National League Southern Premier Division match at Watford on Sunday knowing a win would secure them an impressive fifth place finish in their first season since promotion.

Argyle narrowly beat Watford 3-2 at the end of January and will need to overcome them again to finish above them.

The Pilgrims are virtually at full strength with only the injured Becky Dandridge unavailable, although Amber Pollock is a doubt and will have a niggling foot injury assessed before the match. However, Zoe Cunningham is available after suffering a two match suspension.

Argyle joint manager Trevor Rodd said: “We are looking forward to our last game and then taking a well earned rest – the girls have deserved it. We’ll then move on for next year.”

Rodd revealed that the team will be based at Marjon University for training and will play their home matches next season at the new Manadon Hub.

Argyle go into the match with 11 wins, two draws and eight defeats to their name. They have actually won more matches away than at home, but this could be put down to having played at six different ‘home’ locations this season.

There is a battle for the top striker as Jessie Jones and Natasha Knapman have 12 goals each, while Helen Bleazard has 11 and Zoe Cunningham 10.

Argyle did their end of season fitness tests at Marjons this week and the club were keen to thank the university’s lab team and everyone who has supported them this season.