IVYBRIDGE had to settle for a fifth place finish in the South West Premier League after losing 48-21 away at Camborne on Saturday in their final match of the season.

The Bridgers went into the match knowing a win would have guaranteed them fourth spot and possibly third place, but they were not at their best in Cornwall.

However, they have still secured their highest place finish in league rugby, even though their season ended in disappointment.

A poor first half in Cornwall cost them. They found themselves 31-7 down at the break. They then went 48-7 behind after the interval but came back in the last 10 minutes to add some respectability to the scoreline.

Alex Ducker caused Ivybridge problems and he finished with four tries for the day, with former Albion player Rhodri McAtee, Harvey Bell and Declan Matthews also touching down for the hosts. 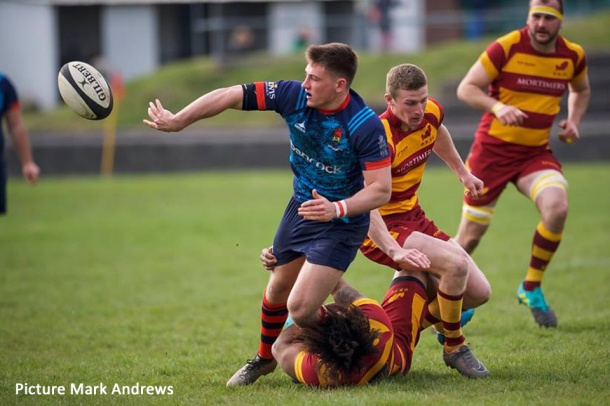 DEVONPORT Services were unable to spoil Okehampton’s party as the visitors won 41-7 at the Rectory to secure the South West One title.

There was little to choose between the teams in the first half, with Okehampton leading just 12-7. But after the break the visitors got on top and then when Devonport found themselves down to 14 players due to injuries the league leaders took full advantage to make the game look easier than it was.

“If you had walked in during the first half you would not have known who was going for the title,” said Services’ team manager Kieran Leach. “It was really tight. They did put us under a lot of pressure but our defence was great, even playing for 10 minutes with 14 men after losing Matt Gregory to a yellow card after only four minutes.”

While Gregory was off the field Okehampton opened the scoring through Richard Friend, who crossed for an unconverted try in the corner.

The visitors, coached by former Albion players Gareth Evans, Bevan Armitage and Rob Dugard, then made it 12-0 when they gathered an attempted chip out of their own half by Services and Kieran Lee ran in to score, which Friend converted.

The game was held up for a while due to an injury to Devonport’s Andy Pond, who had to go to hospital to have a head and neck injury looked at.

But the hosts did manage to get a try before half-time when captain Gregory crossing from a line-out move. West added the conversion to leave Services just five points down at the break.

Okehampton, though, came out firing for the second half and almost straight away they scored after Services lost the ball on halfway line. Winger Lee made a great break for Okehampton before he fed Tom McGratton to score.

The game was put to bed in the 65th minute when Services had a pass intercepted and Dan Fogerty scored to makeit 24-7.

After that it became an uphill struggle for Services, who having lost Pond, Matty Anstis and Sam Bennett with injuries, they had to play the last 10 minutes with 14 players.

Five minutes from time, Ryan Lee score before he added another almost instantly after the visitors intercepted another Services pass.

Then in the dying moments, Services lost the ball from an attacking line-out and Okehampton broke quickly and Richard Friend scored under the posts.

Services had to settle for eighth in the table after finishing with six consecutive defeats.

“Six weeks ago we were 13-7 (wins v losses), but we finish 13-13,” said Leach. “I think that is just down to a bit of commitment. We’ve been having to chop and change every week, but we’ve still be playing some good rugby.”

Services now have to pick themselves up to face Okehampton away next Sunday in the Devon Senior Shield final.

Saltash can look forward to another season in Western Counties West, despite losing 40-11 on Saturday to Sidmouth, who secured the league title thanks to their win.

The Ashes finished fourth from bottom in the table with nine wins to their name.

For 40 minutes it did look like Saltash could cause a surprise and open the door for Crediton or Wellington to take the title. There was nothing to separate the sides at half-time with the game level at 11-11.

But Sidmouth, playing uphill second half, really stepped up a gear to seal the win they need to secure promotion to South West One.

In the first half the pressure of the day appeared to get to both sides and resulted in a bit of kicking battle.

Sidmouth, playing down the slope, had a great chance straight from kick-off but after being stopped right on the line they opted for a simple penalty to take the lead through Dan Retter.

But nine minutes later Kieran Down levelled the game with a penalty of his own.

Saltash then went ahead with an impressive kick from out wide by Down before Sidmouth instantly replied with a try by South West Under-20 trialist forward Aspieli Vea.

The Ashes, though, scored a great try themselves on 27 minutes with James Moriaty going over in the corner to make it 11-8.

Retter kicked another penalty to pull his side level before Down missed two almost identical penalty kicks that could have given Saltash a half-time lead.

Sidmouth, who probably knew Crediton and Wellington were winning, took less than two minutes to go in front after half-time with Ethan Mead crossing in the left corner.

Within seven minutes the visitors had scored another try when hooker Olly Derryman touched down from a driving maul – a tactic Sidmouth used much more in the second period. That made it 21-11.

And on 54 minutes, Sidmouth added a fourth try when prop Hayden Down went over in the corner.

A fifth try followed soon after when winger Luke Wells-Burr crossed out-wide after some great play by the visitors before they completed the scoring in the 75th minute when James Powell added another.

Saltash did have some good pressure in the last 15 minutes but they were not able to make it tell. 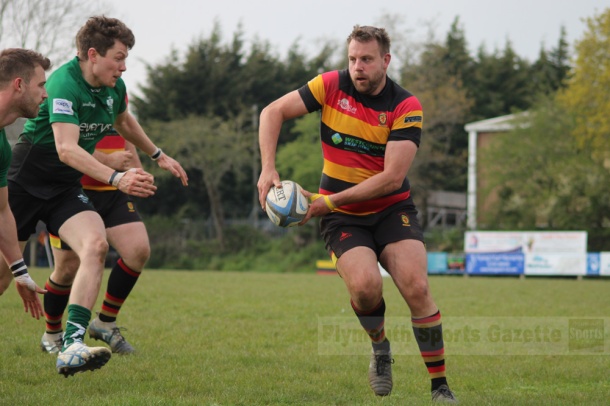 CORNWALL/DEVON LEAGUE AND DEVON ONE

THERE was little final day joy in the Cornwall/Devon League for the Plymouth area teams.

Plymstock Albion Oaks, who were already certain of a fourth-placed finish, were stunned 66-7 away at Penryn, who wrapped up the title with that victory.

Oaks had beaten Penryn at Horsham Fields and the Cornish club were keen to get their revenge and go up to Western Counties West as champions.

The first half was relatively close with the hosts leading 26-7, but after the break it was virtually one-way traffic as Penryn scored 40 unanswered points.

Oaks now have two weeks to pick themselves up for the Devon Intermediate Shield final where they will play league runners-up Honiton away.

Bude finished third behind Penryn and Honiton and they beat Tavistock 29-7 on Saturday.

The defeat meant Tavistock finished 10th in the league after six week ago threatening a top half finish.

Tavvy were only able to manage one try at Bude and it came from Ethan Lamerton, with Rob Pratt adding the conversion.

Tavistock, though, do have a quick chance to bounce back with the RNEC Cup final on Wednesday night against Tamar Saracens at the Rectory.

Already-relegated Plymouth Argaum were unable to go out on a high as they crashed 62-7 away at Pirates Amateurs, who guaranteed their safety with the win.

Argaum have not won a game since Christmas and in recent weeks have been unable to prevent big score defeats.

They did at least manage a try at Mennaye Field on Saturday, which is something they had not done since March 2. Calum Mills was the man that got it and Jake Turfrey converted.

Liskeard-Looe were the only Plymouth Combination team to end their league campaign on a high note. They enjoyed a big 55-12 win at home to South Molton to secure sixth spot in the table.

Tamar Saracens and Old Techs both finished their Devon One season with victories.

Tamar had found themselves 19-13 down with 13 minutes to go but they dug deep to win an entertaining game, where both sides gave it everything.

The visitors had taken an early 5-0 lead with a try by Dan Best, but Exeter hit back with two tries to go 12-5 up. However just before the break Swatton kicked a penalty to reduce the gap to four points.

After the interval, Reece Garbutt scored for the visitors to put them 13-12 ahead before Exeter hit back again with an interception try.

Nine minutes from time, Frazer Tatchell scored a try, but Swatton missed the conversion so his side trailed 19-18.

Swatton then missed a late penalty but the visitors got another and, even though this one was in a tougher position, he made no mistake to win the game for his side.

“It was a great game of rugby,” said Tamar Saracens player Marc Cioffi afterwards. “Everyone gave it everything.

“There was great mutual respect between both teams and it was what rugby should be. They (Exeter Saracens) have an outstanding team and it really was a great game of rugby.”

Ryan Deacan and Josh Heath caught the eye for Tamar Saracens, while Swatton showed great character to make the late kick having missed earlier ones.

Sarries coach Dean Oram also came on for the final 10 minutes to help steady the nerves. It was his first game for the club in four years.

Old Techs finished their league season with a 39-27 away win at New Cross.

There was little between the teams in the first period with Techs just edging it 17-15, but Techs, with their backs impressing, pulled away after the break.

“It was the last league game and there was nothing resting on it so it was a bit difficult to get motivated,” admitted Techs chairman David Evans.

“But it was an away win and meant we managed to do the double over them.”

Techs will end their season on April 24 when they play Devonport Services II in the Lockie Cup final.

OPMs were unable to surprise already-crowned champions North Tawton away on Saturday, going down 41-0 at Taw Meadow.

The first half was quite tight, with the hosts leading 17-0, but they showed their class in the second half to score four more tries. North Tawton’s scorers were Simon Quick (2), Alex Dennis, Gary Sizmur, George Cornthwaite, Jake Ayris and Craig Dennis.