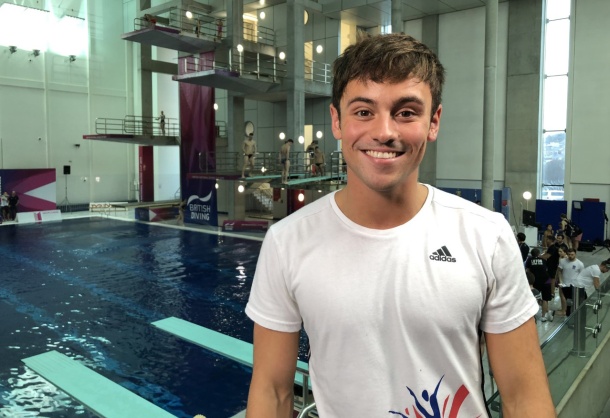 TOM DALEY had to settle for just one medal at the second FINA World Series event in Beijing, China.

The previous week the Plymouth-born diver had claimed individual silver and a mixed synchro bronze at the opening leg in Japan.

In Beijing’s ‘Water Cube’, where Daley made his Olympic debut as a 14-year-old in 2008, he again won a bronze in the three-metre mixed synchro with Grace Reid, but just missed out on making the podium in both the individual and men’s 10m synchro competition with Matty Lee. In both those finals he had to settle for fourth place.

In Japan, world champion Daley had been in outstanding form in the individual event scoring a massive 579.85 points to finish just behind Jian Yang, but he could repeat that on Saturday in China.

He had qualified for the final comfortably finishing second behind Yang with 516.10 points, but in the final could not quite find his top form and scored 488.50 points.

Yang took gold for a second week running with 573.60 points, with his Chinese team-mate Aisen Chen picking up silver with 527.65 and Russia’s Aleksandr Bondar edging Daley out for bronze with 509.95 points.

Daley, though, was happy to pick up another mixed synchro medal with Reid.

In another closely-fought competition, the British pair were always in the shake up for the minor medals, with, China’s Hao Yang and Yani Chang out in front, and they duly delivered with a brilliant final dive.

Nailing a front three-and-a-half somersault pike (107B), their fifth and final dive, Daley and Reid saw off the challenge of Australia and Germany for bronze, with Canada claiming silver.

“It was a solid, steady performance – there was nothing crazily good and there was nothing that was crazily bad – it was just solid and consistent diving, which is exactly what you need at a World Series event, so we’re looking forward to the next one now.”