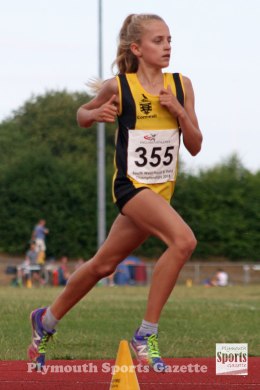 CITY of Plymouth’s Noah Jones, Poppy Northcott and Lili Fern and Tavistock’s Nicolas Maczugowski all won titles at the latest round of the South West Regional Indoor Age Group Championships in Cardiff.

Jones dominated the under-15 boys’ pole vault competition, winning by more than 70cm. He matched his PB of 3.10m which he set at the same venue just before Christmas.

The South West Championships are incorporated into the Welsh Regional Championships, but Jones was the only athlete in either field to achieve more than 2.40m.

Club colleague Northcott was also in dominant form in the under-13 girls’ 800m. She cruised to victory in a time of 2:30.61, which was nearly 20 seconds faster than any other South West competitor and more than 16 seconds quicker than any of the Welsh athletes.

Fellow Plymouth athlete Fern was also the fastest on the day in the girls’ under-13 60m flat. She clocked 8.11 seconds to easily take the title.

Maczugowski, having won the under-13 200m, high jump and shot titles in December, added the South West 1,500m crown to his collection. He ran 5.30.32 for victory. He also just missed out on adding medals in the 60m and long jump by finishing fourth.

In the same under-13 age group, Erme Valley Harriers’ Adam Dingley won a silver and a bronze medal. He took second in the 60m hurdles with 11.11 seconds and finished third in the long jump with 4.10m. He had also won a bronze in the 200m event in December.

City of Plymouth’s Henry Curtis and Tobias Clayden also medalled at the weekend. They finished second and third in the under-17 boys’ 60m hurdles. Curtis clocked 9.08 seconds, with Clayden recording 9.81. Clayden also leaped 5.35m to finish fifth in the long jump.

There was also a bronze medal in the under-13 girls’ 60m hurdles for Roise Northcott, who clocked 11.90 seconds.

Meanwhile, at the BMC Sheffield Grand Prix, Tamar Trotters’ Mike Wilsmore finished sixth in the men’s 3,000m in a time of 8:28.51.