PLYMOUTH Argyle Ladies had a frustrating weekend as their National League Cup tie at Southampton was called off due to a waterlogged pitch after they had already set off.

The Pilgrims had reached Exeter when they got the message the cup tie was postponed.

The team, though, made a quick return which allowed Cornish teenagers Faye Ivall and Tamsin Medd-Gill the chance to have a run out for the development team against Bideford.

It also meant that joint manager Dave Leonard was able to watch the development team in action and cast his eye over Greek under-20 international central defender Panagiota Papaioannou (pictured top).

“She looks okay,” said Leonard. “She has some pace about her and has good positional sense. We will need to see her a couple more times to see how she progresses.”

Ironically Argyle visit Bideford next Sunday when they start the defence of the Devon senior Cup.

Argyle struggled to find any early rhythm against a well-organised Bideford outfit. Indeed it took until ten minutes for Argyle to get in a shot at goal with midfielder Alex Hugh firing narrowly over. 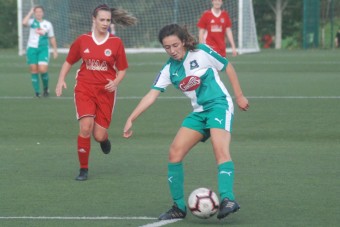 Gabi Alphous also fired over but goalkeeper Amy Darnley had to be alert to deny her previous club by bravely diving at her opponent’s feet.

Medd-Gill started to torment the Bideford defence and from a great run and cut inside set up Alphous who shot weakly.

Maya Ridge was the next to show as her run and shot bounced off the Bideford crossbar.

Bideford then stunned Argyle when in the 37th minute Beth Ellis chanced her arm and let fly from distance with the ball sailing into the top corner of the net.

Argyle responded almost immediately and deservedly drew level when a Ridge run down the right ended with her low shot being pushed out by goalkeeper Zoe Stock to the alert Ivall, who pounced to score.

Five minutes later Argyle took the lead when Alex Hugh powered in a trademark free-kick from the edge of the penalty area which flew into the net under the crossbar.

Argyle began to look sharper in the second half and should have increased their lead but Ivall fired wide of an open goal.

Alphous then had a shot saved before the pacey striker raced on to a 70th minute through ball to fire the ball over the advancing goalkeeper.

Argyle continued to pile on the pressure with Shania Fenlon twice coming close. Hugh also tried her luck, but her effort was well saved.

The Pilgrims kept Bideford penned into their own half with a number of shots being blocked or fired wide.

However, victory was sealed in the 83rd minute, when following a corner, Ivall looped the ball over the goalkeeper from close range during the goalmouth scramble.

Development manager Rob Bonney said: “We took a while to get going. We looked good in spells and then equally poor in others. What seemed to galvanise us and give us the kick-up the backside was conceding the first goal. Once we stepped up and got the equaliser the confidence seemed to soar throughout the team.

“It wasn’t a perfect performance but it was a massive improvement on last week. They are a strong determined group and they got their reward by trying to play the way they should.”