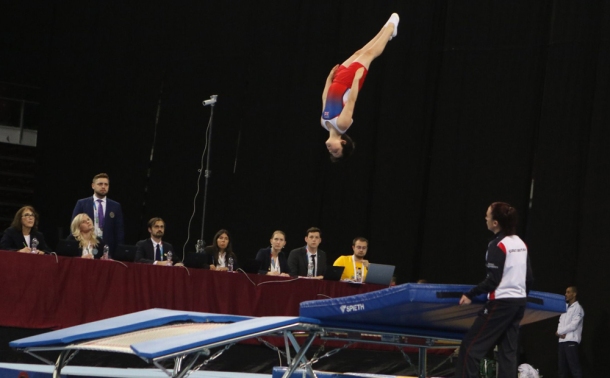 CITY trampolining prodigy Oscar Piper is already making history in his sport – and he’s not even into his teen years yet.

The 11-year-old is the first competitor from Plymouth to participate in the World Junior Championships in the double mini trampoline.

This weekend, he will be competing at the British Championships in Birmingham and he is aiming for yet more success in the 11/12 age group.

“He was ranked highest on the trampoline and DMT (double mini trampoline) last year in his two-year age bracket,” said his mother Ali. “He’s still in that age group this year so, hopefully, he should medal in both.

“His personal objective is to medal and then to be selected to go to the World Championships in November on DMT and maintain his position in both British squads.”

Piper, who’s been part of the British development team for the last two years, will be competing in the Loule Cup for Great Britain later this year, having represented his country at the Junior World Championships last year.

“His dream is to win a medal at the World Junior Championships and get to the Olympics one day; he is very determined,” added his mum.

The youngster is a member of City of Plymouth Trampoline and Gymnastics Club, who are based at Notre Dame School on Looseleigh Lane. Danny Anstey is head coach of the club and has worked with Piper since the age of four.

“Since the start of the club in March 2015, Oscar has been an individual that many in the club look up to and aspire to work with,” said Anstey.

“His progression from 2015, competing in regional grades to now challenging to be the British champion on multiple disciplines is something he should be incredibly proud about.”