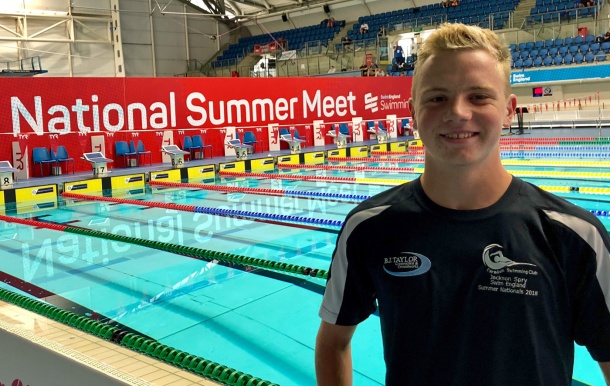 TEENAGER Jackson Spry has enjoyed a breakthrough year with Caradon Swimming Club in 2018.

The 16-year-old started the season ranked 85th in England, but at the weekend finished 13th in his age category in the 200m backstroke at the Swim England National Summer Meet.

“The last six months have been a bit of a whirlwind,” admitted Spry.  “Making my first regional final in May, then suddenly qualifying to swim at the English nationals was certainly not on anyone’s agenda at Caradon.

“The training has been hard work but the race was an incredible experience and to finish 13th in England isn’t too bad.”

The last few months the teenager has been working to a specific programme that has increased the amount he trains both in the pool and in the gym whilst at the same time studying for and completing his GCSEs.

Caradon head coach Jason Quiterio said: “The focus, determination and desire Jackson has demonstrated over the past six months is an example to any young swimmer.

“Swimming is a tough sport – when you race, there’s no places to hide. Your performances reflect how you train.

“In January, Jackson was ranked 85th in England, to finish the season ranked 35th in England and 13th at the English Championship is amazing and a great platform to build for next season.

“We are looking forward to setting new goals and training to achieve these.”