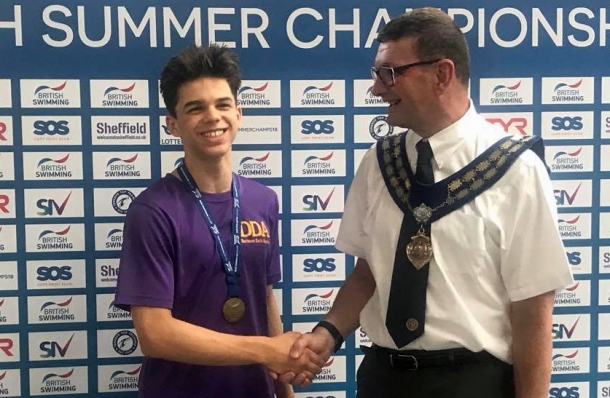 Just a day after breaking the British age group record and winning gold in the 13/14 year-old boys’ 100m breaststroke event at Ponds Forge, he managed to do the same in the 50m competition.

However, this time the 14-year-old Devonport High School for Boys pupil managed to break the British age group record twice in one day.

In Wednesday morning’s heats, Williams clocked 30.27 seconds for the one-length race. That was one hundredth of a second inside Mount Kelly College’s Oliver Taverner’s previous national record.

But Williams went even quicker in the final, clocking a stunning time of 29.73 seconds, which was nearly a second faster than anyone else in the final.

There were also gold medals on the second day of the championships for Plymouth Leander’s Honey Osrin and James Hart.

Osrin took victory in the 15-year-old girls’ 100m backstroke event. She clocked 1:03.36 to win by nearly six tenths of a second.

Great Britain international Laura Stephens had won one of those golds in the opening finals session on Tuesday.

She backed that up by winning two bronzes 24 hours later. Her first came in the women’s 100m backstroke with a 1:02.40 minute swim.  She then also took third in the women’s 50m butterfly with a time of 27.19 seconds.

There were also bronze medals for Mount Kelly swimmers Sam Dailley and Taverner.

Leander’s Tegan Drew and Lana Broekhoven just narrowly missed out on medals. Drew came fourth in the 17/18 years’ 100m backstroke, while Broekhoven finished in the same position in the 15-year-old girls’ 200m breaststroke.

British Summer Champs, Finals day 2
Honey Osrin GOLD 100 Back, James Hart GOLD in the 200 Fly. Laura Stephens BRONZE 100 Back & 50 Fly. Lana Broekhoven and Tegan Drew were edged out of medal contention to 4th Place finishes in the 200 Breast and 100 Back events respectively. pic.twitter.com/MnhTdYFySv