CITY of Plymouth athlete David King continued his build-up for the European Championships by recording a season’s best at the Spitzen Leichtathletik meeting in Lucerne on Monday night.

The Great Britain international clocked 13.57 seconds to take fourth place in the 110m hurdles B race at the star-studded event in Switzerland.

Afterwards he said: “Things are slowly but surely starting to come together. Enjoying racing and looking forward to the next one in London at the Diamond League.” 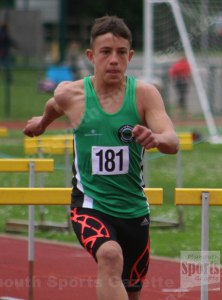 Meanwhile, another City of Plymouth hurdler, Henry Curtis, set a new personal best at the South West League meeting at Exeter on Sunday.

Curtis clocked an impressive 11.89 seconds for the 80m hurdles. That puts him in the UK top 30 and was a perfect way to warm-up for this coming weekend’s English Schools’ Track and Field Championships in Birmingham, where he will be representing Cornwall.

Team-mate Sammie Harris will also be competing in the sprint hurdles in Birmingham. She also won at Exeter, clocking 11.74 seconds to easily take victory in the under-17 girls’ 80m hurdles. Harris claimed a bronze at last year’s English Schools’ Championships in that event.

Erme Valley Harriers’ Estelle Hodges took second behind Harris on Sunday in a time of 12.63 seconds. Hodges did win the under-17 triple jump with a leap of 10.00m.

There was a top quality under-15 girls’ high jump competition at Exeter, which saw two of the country’s top 13 battle it out. Torbay’s Georgina Scoot took victory with a PB of 1.65m with Erme Valley’s Ella Isaias second with 1.60m. Both will be part of the Devon team at the English Schools, along with Exeter’s Megan Hamilton-Strong.

There was victory for City of Plymouth’s Noah Jones in the pole vault at Exeter. He won the under-15 boys’ event with 2.80m.

Tavistock’s Bradley Stevens claimed victory in the under-17 1,500m steeplechase with a 4:52.74 run. Club colleague Tilly McDowell was third in same event for under-17 girls with a time of 5:55.81.

There was a new PB for Tavistock’s Harry Tomlin in the under-15 discus. He threw 26.05m to finish second.

Tavistock’s Nicolas Maczugowski was third in the under-13 shot with 7.26m and he also set a new PB of 4.42m in the long jump.

*July’s Armada Summer 5k Series run which should have taken place this Wednesday has been cancelled due to England’s World Cup semi-final. The next run will be held on August 8.