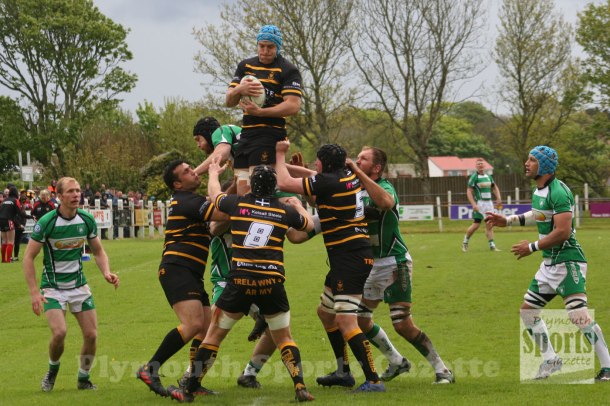 DEVON claimed a long-awaited victory over Cornwall on Saturday at rain-soaked Camborne in the County Championship.

The Green and Whites had not beaten the Duchy in a County Championship match since May 2010 and had also lost seven consecutive Tamar Cup games as well.

But they returned home over the Tamar 20-19 winners on Saturday and ended Cornwall’s hopes of reaching a sixth successive Twickenham final.

Cornwall did out-score Devon three tries to two, but they paid for a disappointing first half display where they found themselves 17-0 down.

The Duchy, without last year’s stars like Sam Matavesi, Robin Wedlake and Matt Shepherd, just could not get anything going in the first 40 minutes as they played up the Recreation Ground slope. 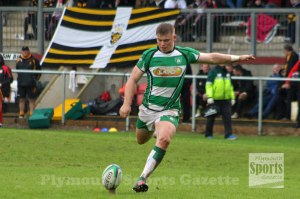 Former Plymouth Albion back Tom Putt put Devon ahead with a penalty on 13 minutes, having missed one in almost the same spot six minutes earlier.

Cornwall then suffered a blow when Plymouth Albion-bound fly-half Fraser Honey suffered a serious-looking injury, which held the game up for seven minutes.

As the Duchy were regrouping, Devon went 10-0 up.

The hosts dropped the ball on the halfway line and Matt Crosscombe kicked forward. He raced with Cornwall full-back Mitch Vague for the ball. It looked like Crosscombe might have scored but referee Vergan Boscawen decided he had been stopped illegally anyway and awarded Devon a penalty try and also sin-binned Vague.

At the restart, Cornwall were awarded a penalty at the other end. However, rather than go for goal they went for the corner and lost the line-out.

Their line-out was a major problem for them in the first half and it cost them a try in injury-time. 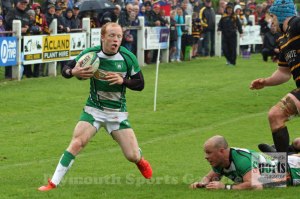 Cornwall did well to stop Ivybridge full-back Charlie Briant from scoring in the corner after a great break by Putt. But the hosts then lost the line-out and Devon scored through former Leeds and Jersey lock Nathan Hannay. Putt converted to put Devon 17-0.

Putt attempted a penalty from the halfway line straight after the interval, but he was just off-target  and seven minutes later Cornwall cut the gap to 17-5 when Penryn flanker George Jones scored from a good drive.

With the wet surface making it difficult for players to keep their feet, as well as the ball, there were a number of injuries. Opposite centres Duncan Tout and Crosscombe both had to be helped off midway through the second half.

Cornwall gave themselves a lifeline when former Albion captain Jake Murphy scored a fine try under the posts, which Camborne’s David Mankee converted. That left the Duchy just five points behind.

But from the restart Devon got into Cornwall’s 22 and patiently kept hold off the ball before winning penalty after some good work by former Plymouth forward Wayne Sprangle. Putt crucially put the penalty over to make it 20-12.

Six minutes from time, Redruth’s Tom Notman went over from a driving maul and Mankee converted to put Cornwall just one point behind.

In the dying minutes Cornwall pressed looking for a winning score. They got into Devon’s 22 but just when it looked like they were making some ground with their forwards they went wide and knocked on. Devon secured the ball at the scrum and ran the clock down before kicking out to win the game.

The victory was Devon’s first since their return to the top division of the County Championship, while it was Cornwall’s first group loss in six years.

However, Devon are still facing relegation after Kent beat Surrey on Saturday. With relegation decided over a two-year period, Devon know they have to beat Kent next week to stay up.

Although Cornwall only have a draw to their name this year, they picked up a maximum 15 points last season and so will stay up no matter what happens next weekend against Hertfordshire, who lost to Gloucestershire at the weekend. Cornwall will be hoping to have Shepherd and possibly a few other Albion players available for that trip after they completed their league season on Saturday with victory over Loughborough.