TRAVIS BRAMLEY was first home for the second successive month in the Armada Summer 5k Series.

He clocked 17 minutes and 11 seconds, which was slightly slower than he ran four weeks ago, but was still good enough to hold off the challenge of Plymouth Harriers’ Steve Fletcher.

Fletcher finished in 17.24 minutes, with youngster Sam Yearling, who was second in April, taking third this time in 18.02. 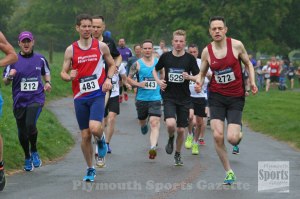 Second was Mudcrew’s Emily Warren in 21.50, with Storm’s Clare Faithful taking third in 22.26.

Despite wet conditions, 175 runners finished the course around the grounds of Saltram House.

Full results can be found HERE, while a gallery and video can be viewed below.

Meanwhile, there were a number of eye-catching performances from the region’s athletes at the opening South West League meeting of the season at Exeter.

Evans-Shields also set a PB in the shot with 7.82m, which puts her in the UK top 30, while Heard came second in the long jump with 4.28m.

Fellow City of Plymouth athlete Poppy Northcott jumped a PB of 3.99m in the same long jump competition and clocked 29.97 seconds in the 200m, but her highlight came in the under-13 girls’ 1,500m. Northcott, who has just moved up from the under-11s, clocked 5:14.39 over the metric mile, which ranks her 26th in the country.