SALTASH will put their promotion ambitions to one side on Saturday as they bid to move within touching distance of Twickenham.

The high-flying Cornwall/Devon League side will host Berks/Bucks/Oxon Premier leaders Slough at Keyham in the quarter-finals of the RFU Senior Vase (2pm).

Saltash reached the semi-finals last season before losing to Farnham. They would love to go one better this year, but at the moment their only focus is on Slough.

“All we are worrying about is trying to beat Slough,” said Saltash coach Nick Skinnard.

“We don’t really know much about them, but I am sure they will be pretty duable and tough.” 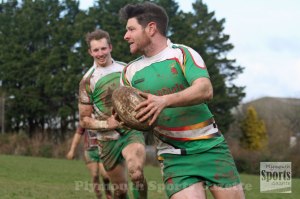 Slough have only been beaten once this season and are 17 points clear in their 10-team league.

Saltash’s record, though, is equally as impressive. Only Wellington and Withycombe have managed to beat them this season in their 14-team division and last weekend they scored more than 160 points in two league matches to move level on points with Wellington at the top of the table.

The Ashes also have home advantage in the South West Divisional final on Saturday and they hope that could be key, even though they have had to switch the tie to artificial surface at Keyham from their Moorlands Lane ground due to the weather.

They also have last year’s experience to call upon.

“I don’t think we did anything wrong last year,” said Skinnard. “We just lost to Farnham (in the semi-finals) who were very, very good.”

When asked what Saltash’s main target this year was, whether it is promotion to Western Counties West or a first trip to Twickenham, Skinnard said: “We don’t really set out goals; we just go out to enjoy ourselves.

“You just want to win and do as well as you can in everything. There’s no master-plan or goal – we’ll just do what we can.”

IVYBRIDGE will look to move out of the relegation zone in the South West Premier League when they travel to play-off chasing Bournemouth.

The Bridgers fell into the bottom three last weekend when their game with Bracknell was postponed.

They are only one point from safety and do have a game in hand. The league is that tight that a bonus-point victory on Saturday in Dorset could move them up as high as eighth.

Ivybridge have shown they can match the top teams in the league recently. They beat second-placed Maidenhead 49-26 in their last game and prior to that pushed third-placed Newton Abbot all the way before narrowly losing 17-10.

“Bournemouth is a tough place to go,” said Ivybridge coach Lewis Paterson.  “They are at the right end of the table and we really need to be on our game.

“We just have to make sure the squad is hungry, on form and sticks to the game-plan. There’s certainly no reason why we can’t come away with a win. We showed that against Maidenhead. We just need the right Ivybridge to turn up.

“If we get a good five-point win we will climb that table. But first and foremost is about getting our performance on the money.”

When the teams met earlier in the season at Cross-in-Hand they played out an incredibly high scoring game which the Dorset side won 51-39.

“They did well down at our place,” said Paterson. “We managed to score a lot of points against them but our defence was so poor and they were so on form that day that they managed to capitalise.”

Ivybridge have not played since February 24, but they have only been beaten twice in 2018 and they were both by just one score.

Ivybridge are forced to make some changes. Forwards Jon Morgan, Nathan Reeves, James Sloan and Justin Rogers are unavailable, but fit-again Alex Hall is set to start, as is Devon Under-20 lock Adam Walker.

In the backs, Ivybridge have good availability and hand another start to youngster Jay Toogood, who lines up on the wing.

“We know how big their pitch is so we have decided to go with Jay Toogood because not only has he been training well but he’s also got an abundance of pace,” said Paterson. “If you put him in the right amount of space he will be very, very dangerous.”

On the bench Owen Garner and Jon Westall are given a chance. Second-row Westall could make his debut in Dorset.

“He’s been at the club a few years and is a very committed development team player,” said Paterson. “He works very hard in training and he has definitely warranted his opportunity.  I’m sure he will grab the opportunity with both hands. He’s a good player and definitely won’t look out of place in the first team.”

TAVISTOCK will be hoping they can finally get off the mark in 2018 when they host Withycombe at Sandy Park on Saturday.

Tavvy were encouraged by last week’s performance against fifth-placed Bude. Although they lost 24-15 they did have chances to win the match.

Withycombe are only three places above Tavistock in the table and they have lost their last three matches, including a defeat at Torrington.

The Exmouth-based club have been one of the most inconsistent sides in the league this season. They have lost to the bottom sides but beaten Saltash and pushed Wellington quite hard last week.

“We had another positive session this week,” said Tavistock coach Hammy Kerswill.

“The belief is remaining strong, despite results not going our way.

“Our scrum is cohesive and our backline are looking good. We’ve set small achievable targets again this week and hope to combine last week’s performance with an improved line-out and execution when we enter the opposition 22.”

Martin Budden, Aidan Mason, Darren Guppy and Ben Milligan are unavailable. Guppy has to work gritty roads this weekend due to the weather forecast, whereas Milligan is missing due to severe sunburn suffered on a skiing holiday. However, Tavistock are able to welcome back Jack Jones and James Perkins. Kerswill is set to line-up at prop, along with Carl Parsons, while PJ Wilcox is set to get a start at scrum-half, with last week’s man-of-the-match Jack Easton moving to full-back.

Plymstock Albion Oaks have a tough task on Saturday when they host league leaders Wellington at Horsham Fields.

Wellington have not lost a game since September and will be favourites to claim their 20th league win of the season.

However, the pressure will be on them to pick up a bonus point victory with Saltash and Penryn keeping pace with them at the top of the table.

Oaks will be looking to capitalise on that. The Staddiscombe-based club have won three of their last four games and have proved tough to beat at home.

When the sides met in October, Wellington won 39-19.

THE biggest league match in the area takes place at Parkway on Saturday where Tamar Saracens entertain city rivals Old Techs in a vital Devon One clash (12.30pm).

If Tamar Saracens win they will secure their league status and relegate Old Techs.

However, if Techs were to win then it would put the pressure back on Saracens and take the relegation battle down to the wire.

“It is a really big game,” said Old Techs coach Shaun Bedford-Smith. “There is a lot riding on the match.

“We are just glad we have put ourselves in this situation by winning our last two league games. Hopefully, we can get a result and take it to the last week.

“Both clubs have been winning recently and so it should a good game. It’s a game everyone wants to be involved in.”

Neither side has played a league game since February 24, but Old Techs managed to find a friendly last Saturday against Saltash IIs, which they won 12-0.

“It was good that we got a game as otherwise it would have been three weeks without a match,” said Bedford-Smith.

“It was a decent run-out and a chance for us to play some players coming back from injury and people on the fringes, who needed a game.

“We have been playing well and playing some good rugby. We have not just been scrapping through games. The last three games we have played we have deserved to win, so we are going into this weekend in a good bit of form.”

When the clubs met earlier in the season the match was decided by two late penalties with Sarries winning 16-10.

“The last game went their way, but there was not a lot in it,” said Bedford-Smith. “I think it will be another close game.”

Tamar Saracens coach Chey Bryce, though, is hoping it won’t be close. He is hopeful his team can comfortably win it and secure their league safety.

“We are hoping that it’s not going to be a close affair,” said Bryce.

“I’m certainly hoping that we can push on and get a nice lead as I don’t like tight games – my blood pressure can’t handle it!”

He added: “I think all the boys are looking forward to it. We have the strongest side we can get out, so hopefully we will win at the weekend and send them down and keep ourselves safe.

“We want the win, we are not going to lie about that.

“I’m sure they are going to throw the kitchen sink at us to try and get the win themselves.

“We have looked at a lot of new things this week, which we hope will catch them off-guard. I think we are well-equipped to be able to manage whatever they throw at us and hopefully they are not as well equipped to cope with what we throw at them.”

Sarries are expecting a big crowd at the Parkway to watch the vital game.

“I know a lot of people who have said they are going to pop down, before going to another game,” said Bryce.

“We have our past players, vice-presidents and sponsors day. It’s going to be a big day at the club. We’ve managed to get an early kick-off so we can watch the England v Ireland game straight after. It should be a good day out at the club.

“Hopefully, the boys will rise to the occasion.”

Sarries expect to have Tom Hicklin, Tom Rigby, Ryan Deakin and Mike and Chris Cox available again, while Bryce himself is hoping he might be fit enough to feature following a back injury.

The only Devon Two match this weekend will be at Stonehouse Creek where DHSOB entertain Salcombe.

The Old Boys go into the game boosted by claiming their first win of the season last Saturday when they beat St Columba & Torpoint 32-12 away.

This weekend, though, DHSOB will not be able to select any of their colts as they have a Devon Merit Table game. However, the Old Boys are hoping to have a few of their Fijian players available. They had five last weekend.

Salcombe have been inconsistent this season but they pushed Devon One side Dartmouth hard last week in the cup.

“We will be up against it,” said DHSOB’s Mike Freeman. “On their day Salcombe can be good.

“But it was fantastic to win last week. It was a boost and very encouraging.”

DHSOB have been regrouping slowly this season and they hope to have a few more of their servicemen back in the next couple of weeks which they hope can help them in the cup competitions.