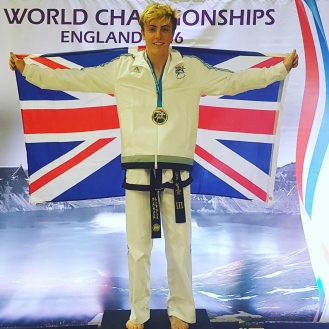 YOUNG athletes from Plymouth Studio School have enjoyed a tremendous summer, returning home with medals for their country from World and European competitions.

Tate Budge (pictured), who is in Year 12 at the specialist sports school at Derriford, won his second ITF (Taekwondo) World Championship title in Brighton.

Budge also picked up a gold and a bronze this year for GB under-18s in the team sparring and patterns events.

Rhys Roffey, 14, who will join the school in Year 10 this September, also picked up a medal at the ITF World Championship, winning bronze in the under-18s sparring, despite this being his first international event and competing well above his age category.

Roffey is a 2nd degree black belt and current English, National and UK champion for his age group. 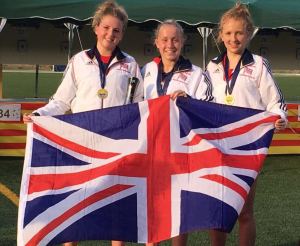 This year’s performance followed on from her silver medal last year as part of the under-19s team.

Divers Matt Dixon and Cody Powell-Tuckett, who will join the school in Years 12 and 10 respectively this September, have also had a medal winning summer.

Dixon won gold in the LEN European Junior Championships in Croatia and Powell-Tuckett scooped a silver medal representing England in the Mediterranean Diving Cup in Italy.

Plymouth Studio School, which opened on-site at the University of St Mark and St John in September 2015 will move into its new £4.2 million building and High Performance Sports Centre on campus this autumn.

The school combines academic and sporting excellence and gives students a chance to take part in its unique sports performance programme.  This includes access to world-class testing and monitoring facilities and training with Olympic and Commonwealth level coaches, including Katherine Endacott and Antony James.

In Year 12, students can choose to study for careers in sport  (including coaching, sports management and sports therapy) or to combine their A levels with their own sporting ambitions and performance

Sports psychologist and associate principal for the school, Jon Rhodes, who has worked with several Rio 2016 athletes said: “This is an amazing performance from our students and testament to their own hard work and the support of their coaches and clubs.

“Our unique Sport Performance Programme provides added focus and support for the students in school time and gives them the opportunity to pursue their sporting ambitions in an environment which really understands and caters for their needs, without sacrificing their school work.

“We’re looking forward to continuing to attract athletes of all levels to the school and working with them to discover and develop the next generation of sporting talent for the city and the UK.”