Trigg, who has struggled with injuries since 2017 when he earned All-American honours with a top eight finish at the NCAA Championships and represented Great Britain at the World University Games, leaped to a legal jump of 15.73m in Dorset.

He won the event by nearly one-and-a-half metres and it will have been a boost to him ahead of next month’s British Championships in Manchester.

Trigg has a personal best of 16.38m, but Sunday’s jump in his opening outdoor event of 2020 was his second best on UK soil and moves him into the UK’s top eight.

Another athlete with his eyes on the British Championships is City of Plymouth’s David King.

King, who is the current British indoor and outdoor champion, opened his 2020 outdoor season by winning the men’s 110m hurdles at the Nuneaton Senior Open with a 13.76 second run.

He narrowly edged out his British rival Cameron Fillery, who took second in 13.80 seconds.

Unfortunately, for both athletes, who were first and second at last year’s nationals, their runs were just outside the legal wind limit.

King is set to continue his season on Tuesday night by competing at the Paavo Nurmi Games, which is a World Athletics Continental Tour Gold meeting.

Fellow City of Plymouth athletes Henry Curtis, Nicolas Maczugowski and Katie Gray took part in the Nuneaton U17 and U15 Open.

Curtis could not have come closer to winning the under-17 100m hurdles event. He clocked the same time – 14.00 seconds – as Havering’s Jacob Blanc, but the Londoner was given victory. Trafford’s multi-eventer Louis Morrison was third in 14.40. 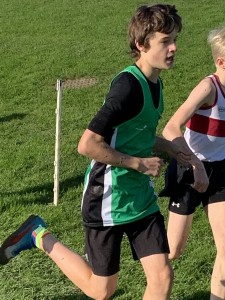 Maczugowski came third in the under-15 80m hurdles with a personal best time of 12.61 seconds. He also claimed a PB in the discus with a throw of 30.09m.

Meanwhile, City of Plymouth’s Hayley Smith was the fastest women at the Covid-19 Series 800m event at Par in Cornwall at the weekend.

Smith clocked a time of 2:17.2 for the two-lap distance to comfortably finish ahead of all the other females that took part in the six-race meeting, which was run under a Association of Running Clubs permit rather than an England Athletics one.

There was a good men’s race, which saw Newquay’s under-20 athlete Lewis Cotterill set a track record to beat City of Plymouth’s Dean Smith and Erme Valley’s Nathan Brown.