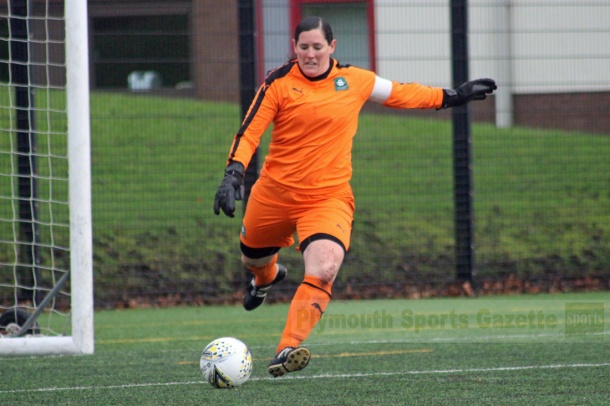 PLYMOUTH Argyle captain Katie Middleton may be nearing the end of a stellar career that goes back almost 20 years, but she still feels she has a lot to offer to the club.

With almost 300 games and nearly 100 goals behind her, Middleton has seen plenty of highs and lows during her time pulling on the green shirt.

Middleton, a qualified physiotherapist with the NHS, has stayed fit during the lockdown by cycling to work, as well as keeping up her demanding training schedule.

An honest and dependable central defender, Middleton has been the rock at the heart of the Argyle defence for many years, but she has also played upfront, in midfield and even in goal for her hometown club.

“What can you say about Katie?,” said Argyle manager Dave Leonard. “To be at one club for nearly 20 years speaks for itself. She has seen it all and what can I add to all the good things said about her over the years?

“I remember Katie at Activate as a 16-year-old and she has been a great ambassador for the club.

“There will never be another player like her. Katie needs to be recognised and it would be nice to see her picture at the ground.”

Middleton started playing senior football at just 14 and has not looked back.

“I have an older brother (Jamie) who played football so we always used to be playing in the garden or the local school fields,” said Middleton.

“He played for a local team and I would always go along with my dad to watch him play. I was 13 when football got introduced into the school curriculum and it was from there that I was put forward for trials for the Plymouth Argyle girls’ centre of excellence that was being set up.

“But someone who I always hold in high regard is Peter Distin – a legendary football coach who will be well known by anyone within the football circuit in Plymouth. Pete was the catalyst behind setting up girls’ football in my school and also allowed me to train with his ladies’ team at Activate when I first started playing. He was always a big admirer of mine and pushed me all the way.”

She added: “I joined the centre of excellence in 1999 and one of our coaches at the time played for Saltash Pilgrims, who were the best team in the area. She asked if I’d go along for trials for them and I was lucky enough to be signed and started playing women’s football from then when I was 14.

“I can’t remember who my first game was against as it was a long time ago.

“Saltash Pilgrims was eventually taken over by Plymouth Argyle in 2001 so the majority of the team and management just moved across. 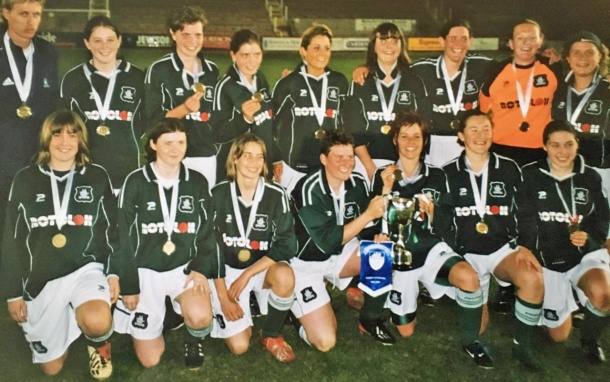 Katie Middleton (back row, third from the right) winning the Devon Senior Cup for the first time with Plymouth Argyle

“I started playing senior football in 1999 as a 14-year-old and played for 10 years until 2009 when I had the opportunity to play for Bristol Academy (now Bristol City) in the Premier League. This was too good an opportunity to turn down so I signed for them and gained some really valuable experience for a season, albeit I was dual signed for Argyle at the time so never really left!

“I rejoined Argyle properly in 2010 as, although it was brilliant playing in the Premier League, having to travel from Plymouth to Bristol three times a week while working full-time was really hard.

“Since rejoining in 2010, I’ve not looked back and it’s been great playing in a progressive team that have big plans for the future.”

She continued: “As club captain, I feel I have plenty of responsibility – first and foremost, to be a positive influence on and off the pitch. If I can teach the younger players coming through how to conduct themselves in training, games and off field activities then I feel as though I’ve achieved something.

“I like to try to lead by example and that includes helping the club with promotional work as well as things on the pitch. For me, being a good role model is the most important thing.

“Women’s football has changed massively since I started playing football. Obviously there is now a lot more money being pumped in to the game, probably still not enough but that is improving.

“The introduction of the professional leagues can only be seen as a step forward and I think this has helped to improve the levels of the teams in the leagues below.

“The leagues that we have played in during recent seasons have definitely improved massively in terms of the quality of opposition and even the facilities that we now have available to us.”

On what her best memory is, Middleton said: “It is probably the end of the 2017-18 season when we played Poole Town at Home Park to win the league and finish the season unbeaten. I also scored our 100th goal of the season in that game which was a great achievement for everyone involved with the team.”

Asked if she had any remaining ambitions, Middleton said: “I don’t think I’m quite ready to throw in the towel on my playing days just yet, although I know that is getting closer.

“In my remaining seasons I just want Plymouth Argyle Ladies to be as successful as we can, keep pushing ourselves as high up the leagues as we can. If I can remain a good role model for the younger girls at the club then I will finish my career with plenty of good memories and achievements to look back on.”