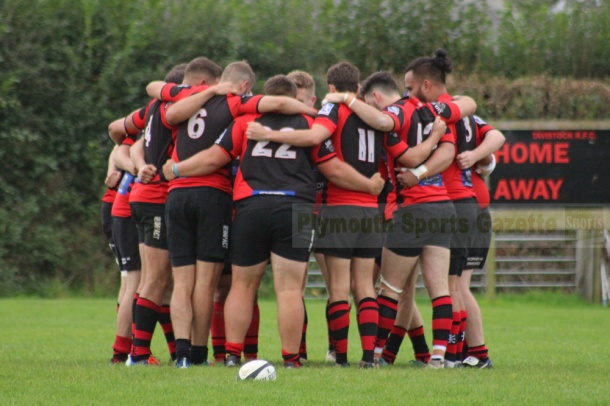 TAVISTOCK moved up another place in the Cornwall/Devon League after picking up a valuable losing bonus point in a narrow 24-17 away defeat at Torquay Athletic.

The Sandy Park club, who got their first win of the season last Saturday, are now up to 12th in the table and within four points of safety.

It looked like Tavistock might cause a bit of an upset as they led 12-5 going into to the break against a Tics side who are well known for their good home form.

Ethan Lamerton got Tavistock off to a brilliant start with an early try after 14 phases.

Torquay replied on 30 minutes with a try Jake Bury.

But from the restart the visitors hit back with a try by captain Andrew Schuttkacker, who ran straight through the middle to score.

However, Torquay pulled level with a touch-down from George Belmore before taking the lead with a try by Tom Drake.

Tavistock got back on the front foot with a dominant scrum and from a penalty they went for a line-out and from the set-play they broke down the wing before Martin Budden finished the move off in the corner.

But with 10 minutes to go the hosts scored what proved to be the decisive try from a breakaway.

Tavistock did have a late chance when they got a penalty in the 22 but they kicked the ball dead going for the line-out.

“There were a few lessons learned regards decision-making,” said Tavistock’s Hammy Kerswill. “But on the flip side we were as cohesive as we have been all season.

“It was a really good game.”

In Devon One, Tamar Saracens were left without a game at the last minute when Buckfastleigh handed them a home walkover.

Sarries had already agreed to bring the game forward to 1.30pm for Buckfastleigh but they ended up giving them the points just a couple of hours before kick-off due to availability problems.

“They phoned up at 11.20am when the kick-off was going to be 1.30pm,” said Tamar Saracens’ Pete Lethbridge.

“It was really disappointing as we have got Dartmouth and Exeter Saracens coming up and we wanted a game.

“I know we get the points, but we would rather have had a game.”

Old Techs did play in Devon One but had to make do with just a bonus point after losing 21-15 at home to rejuvenated Totnes, who had beaten Sarries in their last game.

The game should have been held at Totnes, but they agreed to Techs’ request to switch it with the funeral of Shane Hedges taking place on Friday.

Techs did repay the favour by agreeing to play with 14 men to match their opponents, who arrived a player short.

Old Techs, like in their last match against Exeter Saracens, again paid for a slow start and were 14-5 down at the break before coming back but they could not snatch the victory.

Argaum, playing with the strong wind first half, had plenty of possession and territory in the opening 40 minutes but could not make it tell and with the last play of the half Chris Harmer scored an unconverted try to put OPMs 5-0 up.

After the interval, OPMs turned up the pace, with their pack impressing.

Simon Bray scored a second try for the Old Boys from a maul before Tongan Toetu’u Vaka scored a third.

Teenager Fred Smale then scored a fine individual effort that saw him twice chip over players and regather before running in under the posts. Paul Williams then had the last word after some good play by Paul Bright and Matt Morgan.

Now they find themselves just one game away from a cup final, OPMs will feel they have a chance of winning something this season.

“There is a different attitude around the club,” said captain Billy Garratt. “There is a lot of competition for places. We had three teams out on Saturday and the club is continuing to grow and I think we are on the way to something good.”

Argaum were disappointed to lose five tries to none, especially after drawing with OPMs 15-15 in the league at the start of the season.

“They had a much stronger pack than when we played them earlier in the season,” said Argaum secretary Stuart Quarterman.

“In the first half we had the wind and we camped in their half but they scored a breakaway try to make it 5-0 at the break.

“We gave away penalties in their half when we should have been more patient. It was just indiscipline and we gave them outs in that first half.

“Then in the second half we should have changed our tactics earlier. When we did get it out to our backs they looked good.

“But they (OPMs) deserved the win. For us there were lots of learning opportunities.”

In the quarter-finals of the Devon Junior Plate, DHSOB were beaten 72-26 by higher league Dartmouth at Stonehouse Creek.

The game was quite close in the first half with Dartmouth changing ends 31-14 ahead, but the visitors turned on the style in the second period as DHSOB tired.

“We played extremely well against the wind in the first half and we hoped we could turn it around second half,” said Mike Freeman. “But we just ran out of steam.

“However, we scored four tries against a higher league side and I don’t think the score reflected the effort we put in.”