PLYMOUTH pentathlete Kerenza Bryson continued her brilliant season with a superb display to claim silver in the women’s final at the Junior World Championships in Poland on Thursday.

After a stunning start in the fencing hall, the 20-year-old Brit was never lower than third throughout the competition, crossing the line second to win her second silver of the week in Drzonkow after also finishing on the second step of the podium in the women’s relay on Sunday.

It was Bryson’s first individual major championship medal and she became the first British athlete to claim an individual medal at a Junior World Championships since Francesca Summers’ 2015 triumph in Mexico City.

Bryson began the final in the fencing ranking round and she immediately vaulting herself into medal contention with an excellent performance of 24 victories and just 11 defeats from her 35 bouts.

In the swimming pool, Bryson clocked 2:23.17, which was an improvement on her qualifying time. That left her third after the opening two disciplines.

The ride caused issues for many of the athletes and included six eliminations. However, Bryson kept her composure, rolling just a single pole to score 293 points for her rounds.

That moved the University of Plymouth student up to second ahead of the final laser-run.

Although she was unable to close the gap on Russian leader Adelina Ibatullina, some sharp shooting saw Bryson increase the gap on those behind her to take a superb silver medal at the sport’s flagship junior event.

Fellow Plymouth pentathlete Myles Pillage will compete in the men’s individual final on Friday. The fencing round has already taken place and Pillage claimed 20 wins to leave him well placed ahead of the swim, ride and laser-run.

(All pictures by Phil Sutton in Poland) 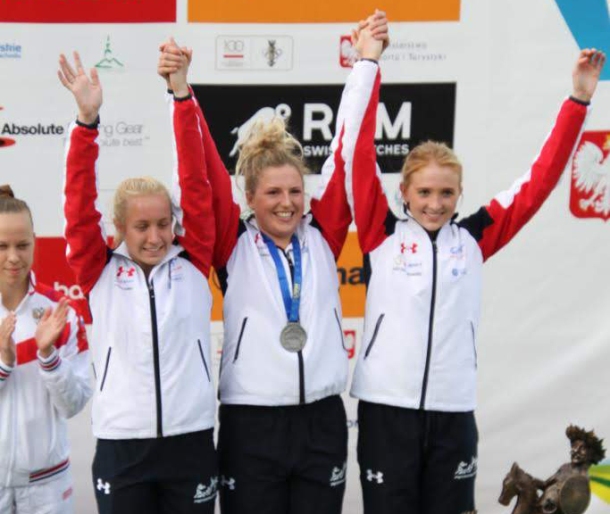