PLYMOUTH Leander’s Honey Osrin produced an impressive swim to win a silver medal on the second day of the European Junior Swimming Championships in Kazan.

Osrin, making her debut for Great Britain, clocked a personal best time of 2:10.30 to make the podium in Russia.

Having only been fifth at the halfway mark, Osrin produced a stunning final 100m and it looked like she was going to win gold, but she was just edged out on the touch by Italy’s Erika Francesca Gaetani.

Osrin is due to swim in the 200m freestyle on Friday and the 100m backstroke on Saturday. 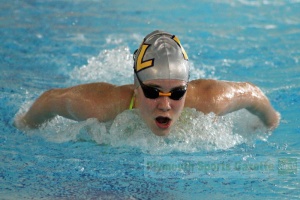 Freeman, the youngest in the field, came through heats and semi-finals to reach the showpiece event, where she finished eighth.

Freeman will also swim in the 50m and 100m butterfly events in Kazan.

He will go in the 200m backstroke on Friday, while Mount Kelly team-mate Oliver Taverner will open his campaign in the 50m breaststroke prelims on the same day.

In a thrilling race Honey was just 0.02 shy of gold pic.twitter.com/Ft8KvIl3NO