Will Battershill in action for Harvard University (picture by Brian Panoff)

ERME Valley Harriers athlete Will Battershill smashed his personal best and broke the Harvard University steeplechase record on his way to qualifying for the prestigious NCAA Championships in America.

Battershill clocked 8:44.36 minutes for the 3,000m steeplechase at the NCAA Eastern Preliminary in Jacksonville, Florida, on Friday night. That was five seconds quicker than he had ever run before and well inside the British European Under-23 qualifying time of 8:48.00. It also broke Harvard’s previous record that had stood for 23 years.

The former Ivybridge Community College pupil ran in the last heat of three at the Eastern qualifier. The top three in each race and the three fastest losers overall qualified for places in Austin.

Battershill was fourth in a fast race but his time was quick enough for one of the 12 spots to go through to the NCAA Championships, which will be held between June 5 and June 8.

Battershill is the top ranked under-23 steeplechaser in the UK and is also ranked fourth senior in the country. 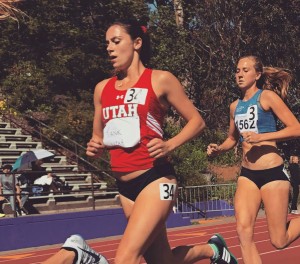 Meanwhile, City of Plymouth’s Poppy Tank agonisingly just missed out by one place on qualifying for the NCAA finals in the women’s 10,000m.

Tank, competing for Utah University, set a new PB of 34:08.80 minutes in only her second run over the distance to finish 13th in the NCAA Western Preliminaries in Sacramento. The top 12 qualified for Austin.

“Poppy just missed out in what turned out to be an amazing race,” said Utah head coach Kyle Kepler. “Heartbreaking for sure, but the effort was there and unbelievable for a PR. I am very proud of her.”

Tank, who represented Great Britain at the European Cross Country Championships in December, had gone into the event ranked 38th out of the 48 Western qualifiers, but she thrived in the bumper field and knocked 13 seconds of the time she had run on her debut earlier this month. The first 10 laps were slow and tactical with a very large field, but then it really heated up. She is ranked second under-23 over that distance in the UK and sixth overall. Tank is also in the top three under-23s at both 3,000m and 5,000m this year.