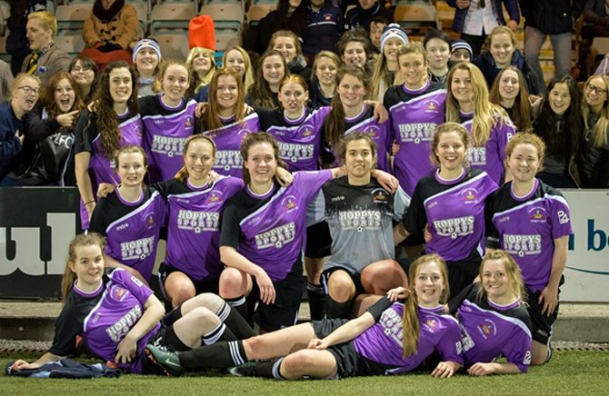 UNIVERSITY of Plymouth Ladies’ Football Club will be hosting a special alumni match on Saturday in memory of a former player who sadly lost her battle with cancer last month.

Abigail Rockefeller, better known as Rocko, joined UPLFC in 2016 and became a legend in the team.

But in May 2018 she was diagnosed with Ewing’s sarcoma, a rare form of bone cancer. It is typically found in children and young people, mostly within the ages of 10 to 20.

She received treatment and support throughout her whole battle at the Teenage Cancer Trust unit at the University Hospital of Wales in Cardiff, but sadly died on February 18.

UPLFC now want to honour her memory and raise money for the Teenage Cancer Trust, which was the charity Rocko had suggested before she sadly passed away.

The team have already raised more than £2,500 via a Just Giving page but want to increase that figure with their first alumni match.

The club have got players coming from as far back as 1991, when UPLFC was formed, to play on Saturday (March 30).

The charity event will be held at Staddiscombe Playing Fields, kicking off at 12noon, and will feature four games in total, including a final, each 40 minutes long.

Anyone is welcome to come and watch, however, UPLFC do ask for donations towards Teenage Cancer Trust. There will be hot food and drinks available at The Staddy.

People who are unable to attend the match but still want to donate can do so HERE.