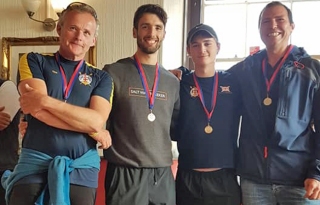 The 8k event sees rowers leave Mayflower Marina and head out towards the naval base before turning around and coming back down the Tamar and heading out to Plymouth Sound. They then return home around Drake’s Island.

The host club will go into their own competition on the back of some impressive performance at the Lead Weigh8 Regetta at Teignmouth on Saturday.

It was Mayflower’s fifth regatta of the season and they claimed four podium places.

Leading the way were their men’s A team, who claimed victory by finishing six seconds ahead of host club Teignmouth. Mayflower’s B team just missed out on third place by three seconds.

There was a second placed finish for their mixed crew, with their ladies and masters’ crews both claiming third places.

Anyone interested in watching this Saturday’s regatta in Plymouth can get a good view from Mount Wise.  The event is due to take place between 9am and 5pm.