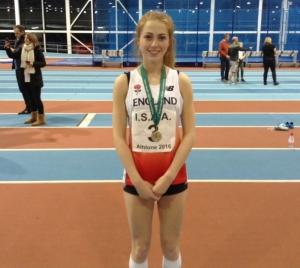 CITY of Plymouth’s Emily Bee produced a tremendous run to claim victory at the SIAB International at Grangemouth in Scotland.

Bee ran a new personal best and UK leading time of 11.02 seconds to win the 80m hurdles for England.

She edged out her national team-mate Marcia Sey, who had won the English Schools’ title the previous week.

Sey ended up clocking 11.12 seconds as England took first and second in the race.

Bee’s time in Scotland, set with a legal wind of +1.7, was not only the fastest in the UK this year but only two other British athletes have ever run faster at under-17 level.

However, the Plymouth High School pupil, who is coached by Neal Edwards, had a nervous moment at Grangemouth when there was a false start. Bee was given a warning but was not disqualified and she overcame the pressure at re-start.